The artwork “Public Hybrid” by the artist David Jablonowski (born 1982, lives and works in Almere and Amsterdam) is the twentieth work to be added to the Emscherkunstweg (Emscher Art Trail). The multipart installation located near the bank of the Emscher River in the Schüren district of Dortmund was unveiled by the cooperation partners of the Emscherkunstweg – Urbane Künste Ruhr, Emschergenossenschaft, and Regionalverband Ruhr – on Friday, November 26. The unique sculpture trail is under the patronage of the Minister of Culture and Science of the State of North Rhine-Westphalia, Isabel Pfeiffer-Poensgen, who is excited about the trail’s latest addition and says, “David Jablonowski’s work ‘Public Hybrid’ is an enrichment to the art trail and a conceptual artwork with a local dimension. It is an amalgamation of raw materials that symbolize the different historical phases and forms of society in the Ruhr area, while also addressing the transformations that have occurred here.” 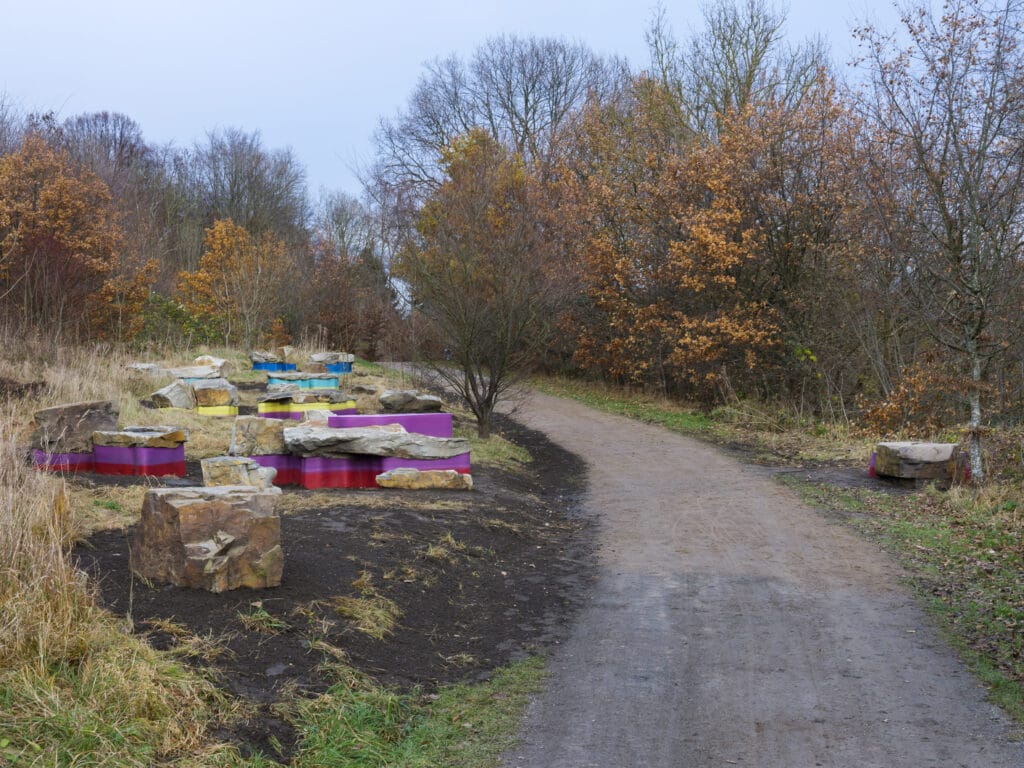 When approaching Phoenix Lake in Dortmund, “Public Hybrid,” which consists of many parts, seems to appear almost out of the blue on a grassy area next to the Emscher-Weg bike path. For the work, Jablonowki stacked 3D printed elements and Ruhr sandstone like sediments on top of each other in several differently colored groups. The artificial formations rise up out of the ground as if they were part of the natural landscape. The stones, which weigh several tons, are supported by the bright, printed elements with color gradations from red to purple or from yellow to turquois to blue. In this way, the artist used a 3D printer to transform plastic waste into amorphous forms that are identifiable as 3D prints through the typical ridges in their texture. In order for the natural breaking edge of the stone to seamlessly fit the plastic, the upper edge of the plastic was also cut by a robot. The sandstone is from a quarry in Sprockhövel and is about 320 million years old. This type of stone, called Ruhr sandstone, is still quarried today and is regarded as one of the most weather resistant in Germany. The installation includes 27 stones altogether, with the heaviest weighing 2.8 tons.

The artist, who grew up in Bochum, explores the history and future not only of this particular place, but of the entire Ruhr area as well. As Jablonowski explains, “The first record of mining here in the south of Dortmund dates back to 1296. I’m fascinated by the idea that the Ruhr area exists on a second level in the form of underground pits and tunnels. I’m also interested in industrial materials and the conditions of their production, especially the invisible structures.” Coal mining brought wealth and new innovations to the Ruhr area, but when it came to an end, the region had to reinvent itself and develop raw materials that can shape the future. 3D printing has the potential for innovation and offers opportunities for more sustainable industrial production. Among other things, 3D printing makes it possible to recycle plastic waste as a raw material in that a 3D printer can create physical objects out of pellets with the help of a computer drawing.

By combining the contrasting materials of plastic and sandstone, along with the technologies associated with them, Jablonowski also addresses the restoration of the Emscher River by the Emschergenossenschaft in which high-tech measures and ecological interventions are being used to form a hybrid landscape. Covering an area of about 30 meters along the Emscher-Weg bike path in Dortmund, “Public Hybrid” invites people to stop and enjoy a stretch of the river that has already been restored. Jablonowski’s reaction to his first permanent artwork in the public realm is “I’m very happy that one of my artworks, which is about history and also offers a vision of a possible future, will now be a permanent part of my old home area.”

Norbert Schilff, Mayor of Dortmund:
“The Emscherkunstweg is a major gain for our region and a magnet for tourists. It lets us show that the image of Dortmund and its surroundings as a gray city where soot flakes fall like rain and briquettes fly through the air is far from the truth. Dortmund is the fourth greenest city in the world and the greenest city in Germany. With his sculpture ‘Public Hybrid,’ David Jablonowski lets us see and feel the connection between the steel and coal industry, structural transformation, the restoration of nature, along with culture and recreation.”

Isabel Pfeiffer-Poensgen, patron of the Emscherkunstweg and Minister of Culture and Science of the State of North Rhine-Westphalia:
“The Emscherkunstweg lets people experience the changes in the Emscher area through art. David Jablonowski’s work ‘Public Hybrid’ is an enrichment to the art trail and a conceptual artwork with a local dimension. It is an amalgamation of raw materials that symbolize the different historical phases and forms of society in the Ruhr area, while also addressing the changes that have occurred here. On the one hand, there is the sandstone from Sprockhövel that is millions of years old and is closely linked with the local mining history; on the other, there’s the colorful synthetic material that was digitally produced by a 3D printer out of plastic waste and that also stands for the fundamental transformations in this region. Through their geological-like layers, the hybrid formations refer to the traces left by humans in the Anthropocene.”

Karola Geiß-Netthöfel Regional Director of the Regionalverband Ruhr:
“‘Public Hybrid’ not only refers to the past of coal mining in the Ruhr area; it also points to the innovative potential of our region through the use of modern production techniques. I am certain that it will soon become a favorite of visitors of the Emscherkunstweg (Emscher Art Trail).”

“The restoration of the Emscher River is a highly innovative project that links the modernization of technical and natural infrastructures with the goal of ecologically improving the river and its tributaries, while making it usable and enjoyable for people again. We are excited about David Jablonowski’s work ‘Public Hybrid,’ which addresses the interaction between nature and technology and defines the changes in the Emscher area in an impressive way.”

“The Emscherkunstweg (Emscher Art Trail) and the City of Dortmund have gained another artwork that is truly multifaceted. In ‘Public Hybrid,’ sandstone that is millions of years old meets innovative technology. In the form of 3D printing, David Jablonowski refers to the digital structures that also define our communication and which, much like the mining tunnels and seams underground, exist in an invisible parallel world in the air.”

“The expansion of existing artistic approaches plays a large role in the further development of the Emscherkunstweg (Emscher Art Trail). David Jablonowski works with entirely new materials in a way that is not merely superficial; he also creates a multifaceted reference to the industrial heritage of this region. At the same time, he has created a spatial situation of great beauty that can be associated with an updated version of Caspar David Friedrich’s historical landscape painting.”

The Emscherkunstweg is a cooperation between Urbane Künste Ruhr, Emschergenossenschaft, and Regionalverband Ruhr under the patronage of Isabel Pfeiffer-Poensgen, Minister of Culture and Science of the State of North Rhine-Westphalia. The sculpture trail grew out of the temporary exhibition Emscherkunst (Emscher Art), which has been accompanying the restoration of the Emscher River by the Emschergenossenschaft since 2010. In 2018, the artistic director of Urbane Künste Ruhr, Britta Peters, created a new conceptual approach for the Emscherkunstweg, after which the project was expanded and transformed into a permanent art trail. 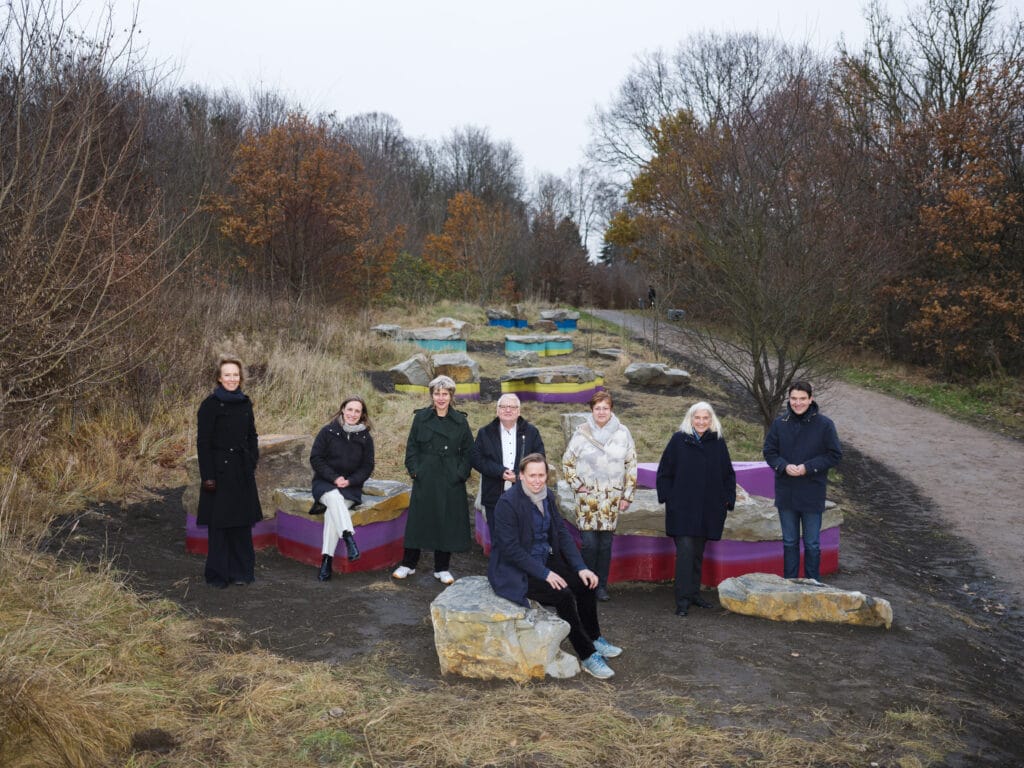 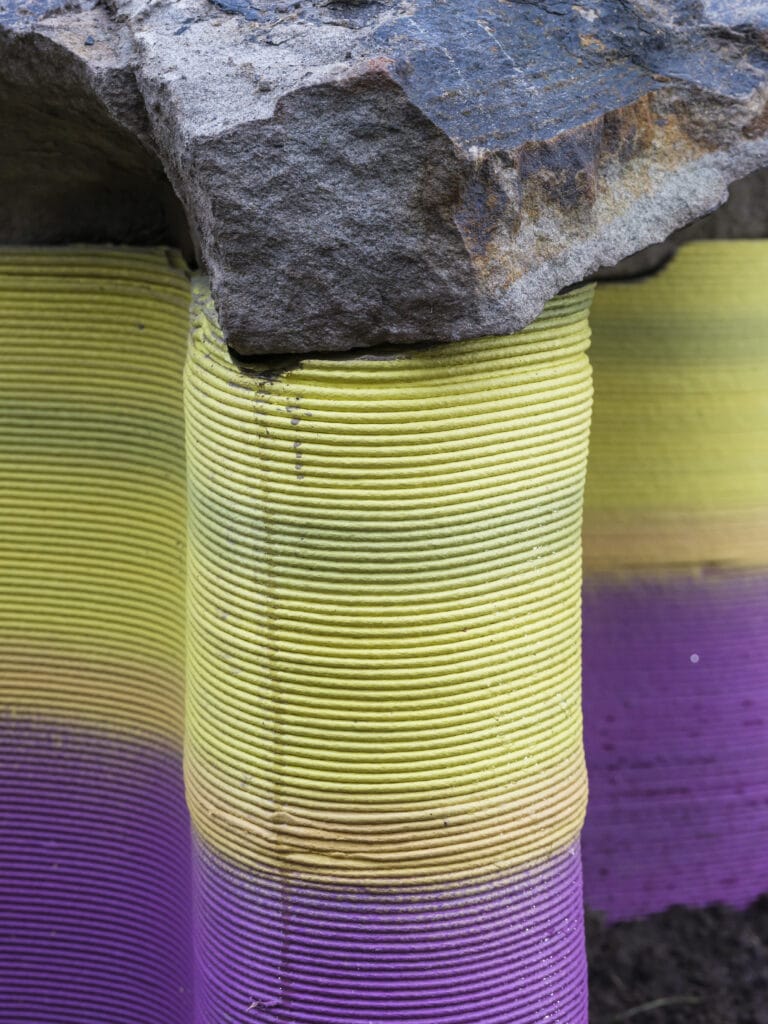 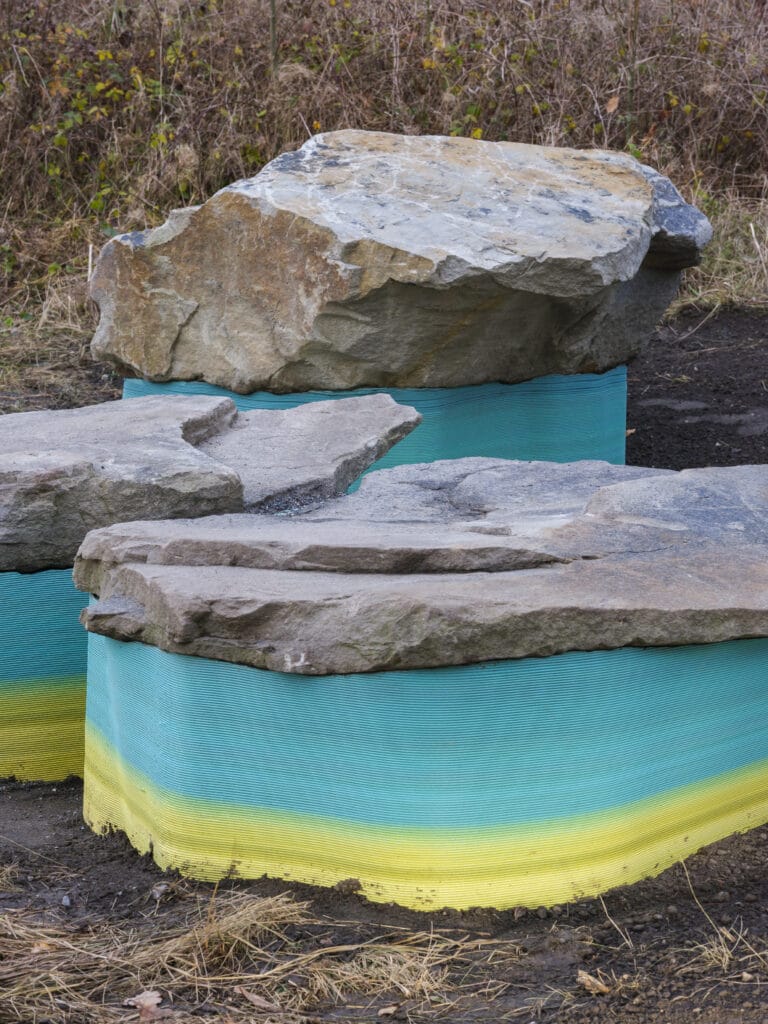 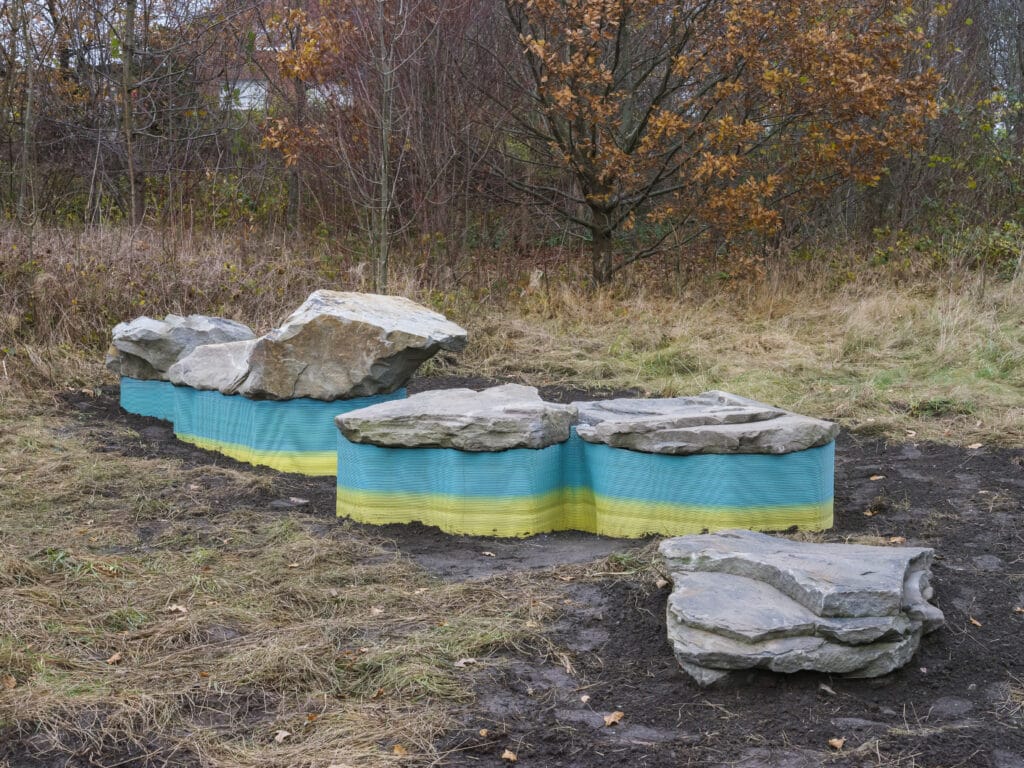 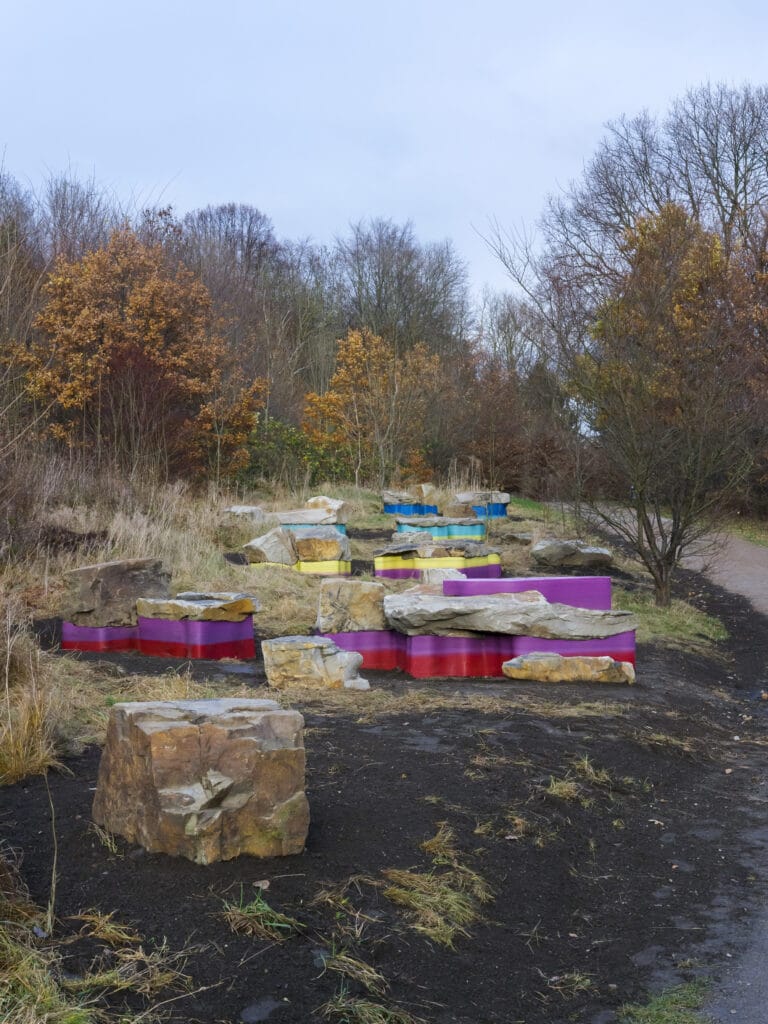