“Neustadt” (New City) is an artwork created by Julius von Bismarck in collaboration with Marta Dyachenko and will be officially opened to the public on May 1, 2021. The cooperation partners behind the Emscherkunstweg (Emscher Art Trail) from the arts, river management, and regional planning sectors, respectively—Urbane Künste Ruhr, Emschergenossenschaft, and Regionalverband Ruhr—are delighted—are delighted that this expansive, permanent installation will be added to the Emscherkunstweg. Isabel Pfeiffer-Poensgen, the Minister of Culture and Science of the State of North Rhine-Westphalia, is especially pleased about the “poetic comprehensive artwork” and is certain that “Neustadt” will put the Emscherkunstweg on the art map yet again.

More than two years of planning and research went into the making of “Neustadt.” Von Bismarck, who lives in Berlin, asked Dyachenko, who is an architect and artist, to collaborate with him on the project. After researching the last twenty years of the history of construction, or rather of demolition, in the Ruhr region, they selected 23 no longer existing buildings that they wanted to bring back to life in the form of sculptural models. A stretch of green in the North Duisburg Landscape Park between the Alte Emscher (an arm of  the Emscher River), the Grüner Pfad (Green Path) bike path, and the A 42 autobahn will now be the home of the fictional city of buildings in a scale of 1:25.

“Neustadt” is about city life on the Emscher River in the entire Ruhr area. The types of buildings and intended uses were not selected according to a strict system, but rather according to aesthetic and sculptural criteria with the goal of presenting a cross-section of local urban architecture. This means that a late 19th-century historicist apartment building from Essen can be found standing next to a residential complex from a model housing development in the city of Marl from 1965. Both of these are in the same neighborhood as models of residential prefab buildings testifying to the social history of the 1970s. Another building, the 16-story skyscraper nicknamed the “Weiße Riese” (White Giant) in Kamp-Lintfort, has an especially turbulent history and was finally torn down after standing empty for years to create space for something new. St. Paul’s Church in Duisburg from 1970 and St. Joseph’s Church in the Kupferdreh neighborhood of Essen, which was completed in a neo-gothic style in 1904 and demolished in 2015, had life cycles that stand for how the changes in society are also reflected in religious communities. The Essen School of Adult Education (Volkshochschule), with its unique tiered architecture and aggregate concrete reliefs on its exterior, and the indoor swimming pool in Marl are both reminders of “better times” and raise questions about the preservation of historic buildings that were once icons of modern architecture in the post-war era. Many of the buildings share a long history of “suffering” and gradual demise because those in charge were not able to find a use or to repurpose or renovate them. 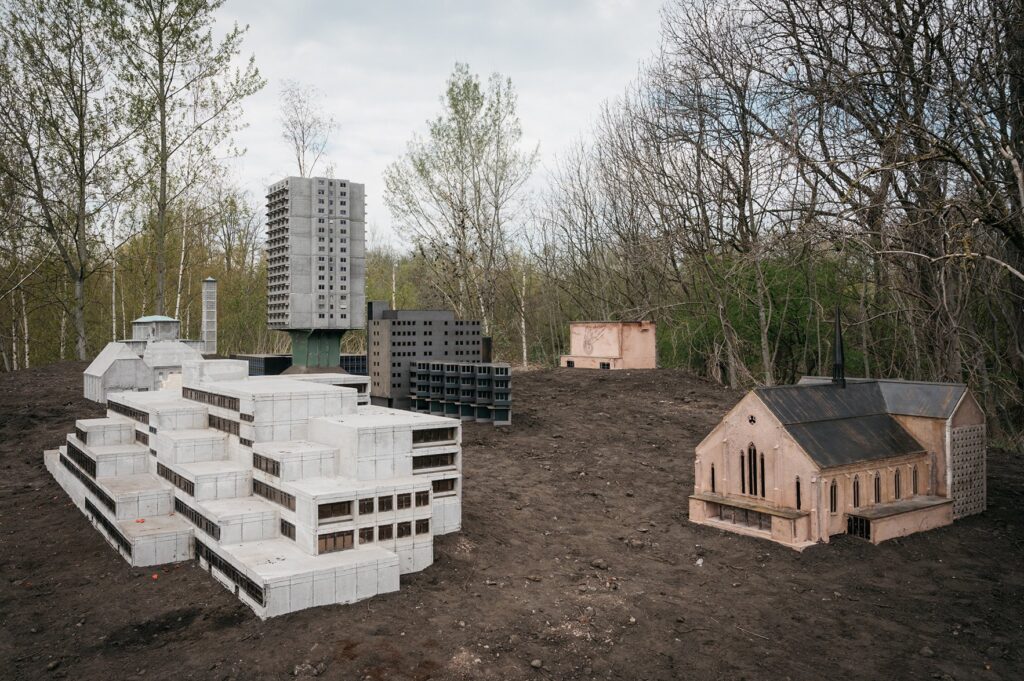 “Neustadt” is a “memory machine” that evokes memories beyond our personal experience. It also provokes questions about the development of the urban realm, such as: Why were these buildings demolished? Who gets to decide whether a work of architecture is worth keeping? Economic aspects clearly play an increasingly larger role. Who hasn’t heard the recurring argument that it costs less to construct a new building than to renovate an old one? What most people do not know, however, is that the construction sector is responsible for generating 38% of global carbon dioxide emissions today. Ecological issues are important to von Bismarck and Dyachenko, such as: How can we make construction more sustainable and urban planning more sensible, long-term, and/or flexible?

Von Bismarck and Dyachenko elaborately transformed the buildings into sculptural models using concrete and steel, creating finely detailed ornamental window fixtures, wall reliefs, and countless tiny window panes made of acrylic glass. Although much attention was given to particulars, the artists’ goal was not to create exact, faithful renditions, but to make the buildings recognizable. In their eyes, the original buildings are “visions in concrete” that have been brought back to life in the “city of a future that never happened.” In time, the vegetation will spread into this fictional city, creating a shift in scale as weeds and plants begin to loom large like trees, although several buildings still stand taller than us, even when shrunk. The new city of “old buildings” is a wonderful place to linger and reflect on the development of our immediate surroundings.

For the realization of “Neustadt,” the following sponsors generously provided the Emschergenossenschaft with consultation and non-monetary support.  As in previous projects for the Emscherkunstweg, the Kramer Group in Dortmund assisted with the logistics for the construction site in the North Duisburg Landscape Park and was responsible for the construction of the foundation and the installation of the building sculptures.  The Berding Beton Company completed the model of the Essen School of Adult Education and provided transport for the model to the North Duisburg Landscape Park, where they assisted the artists with construction. 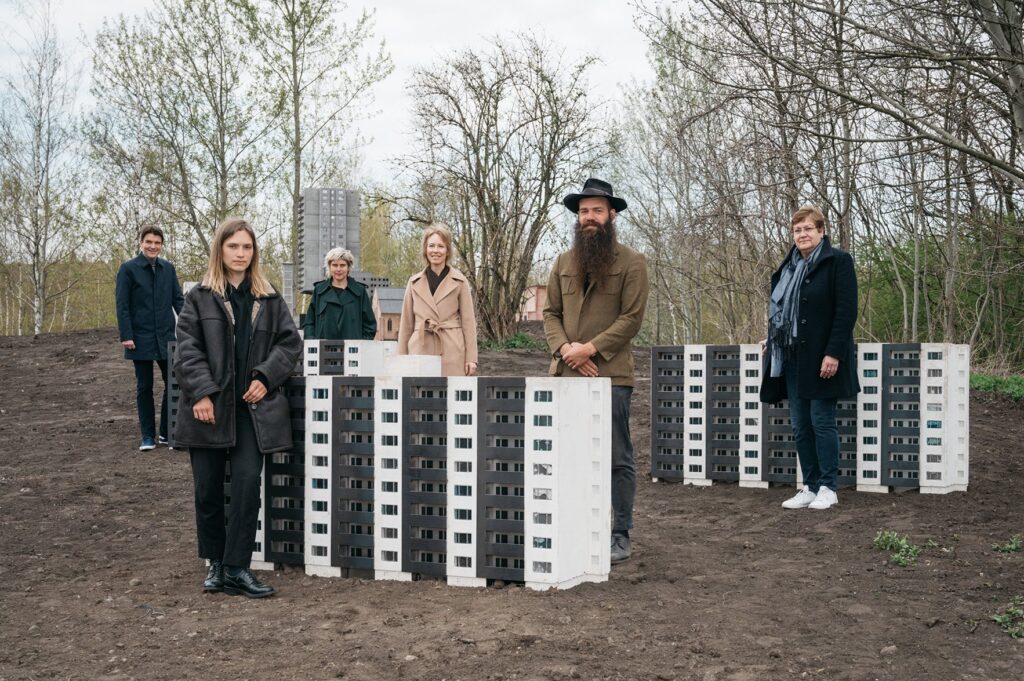 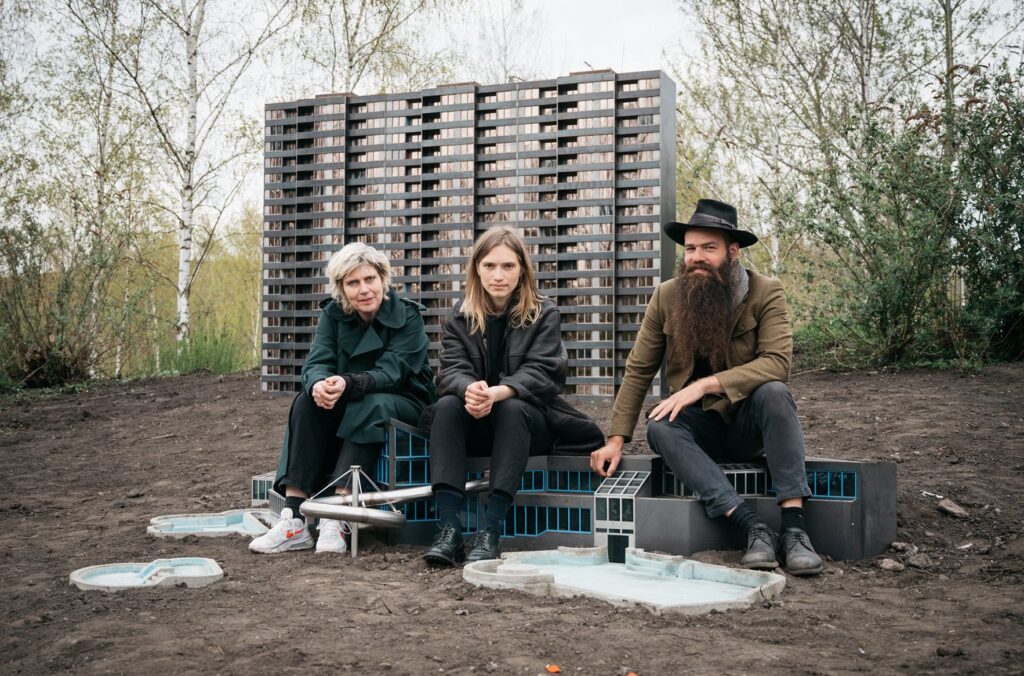 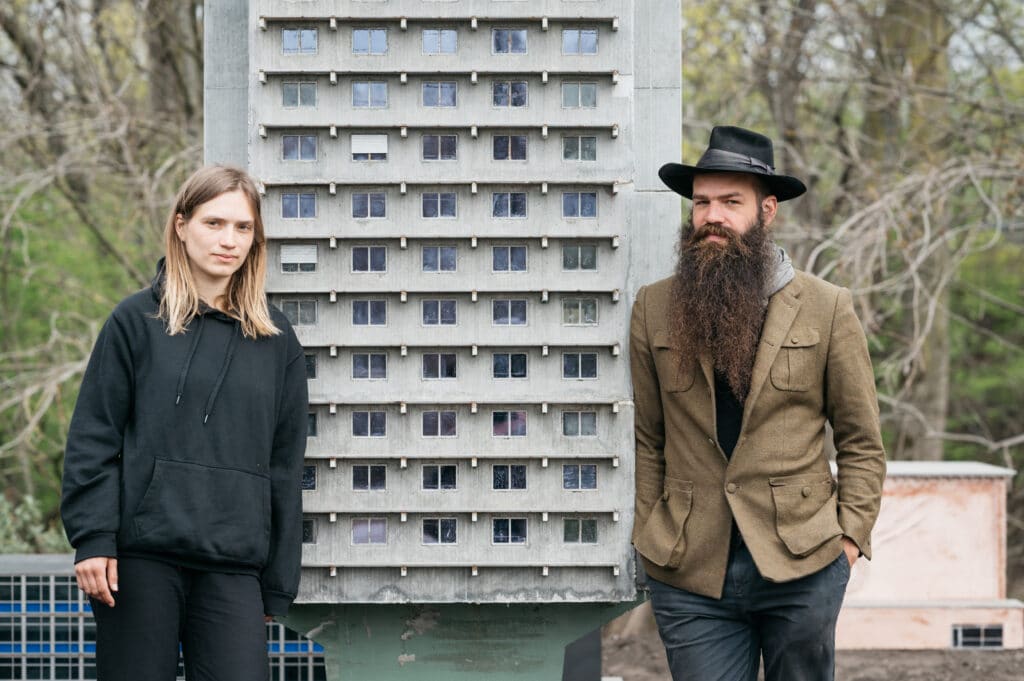 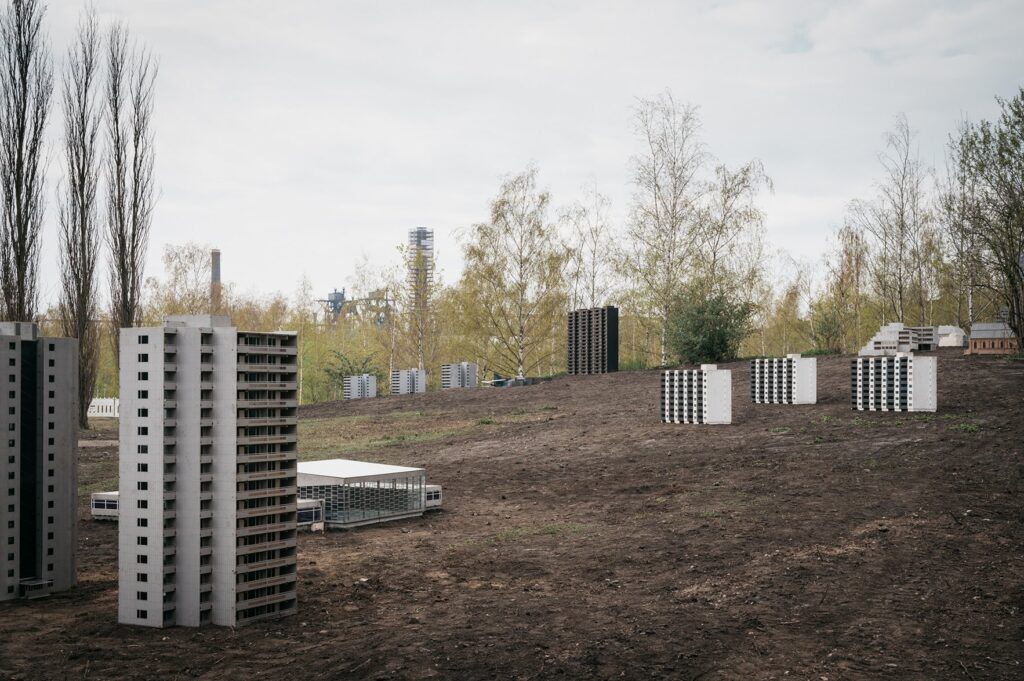 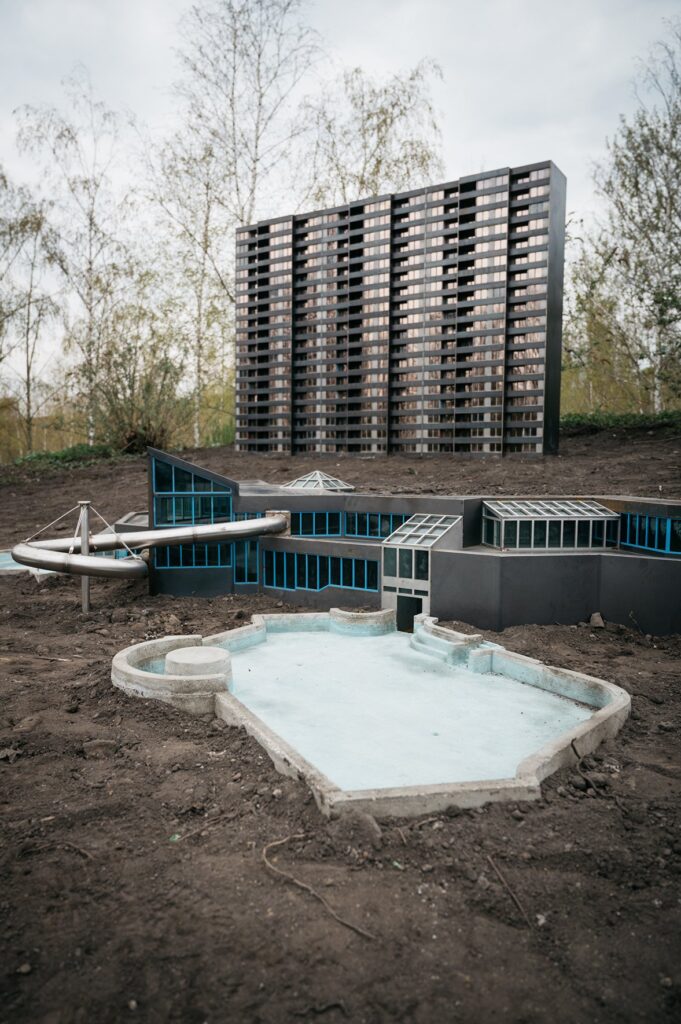 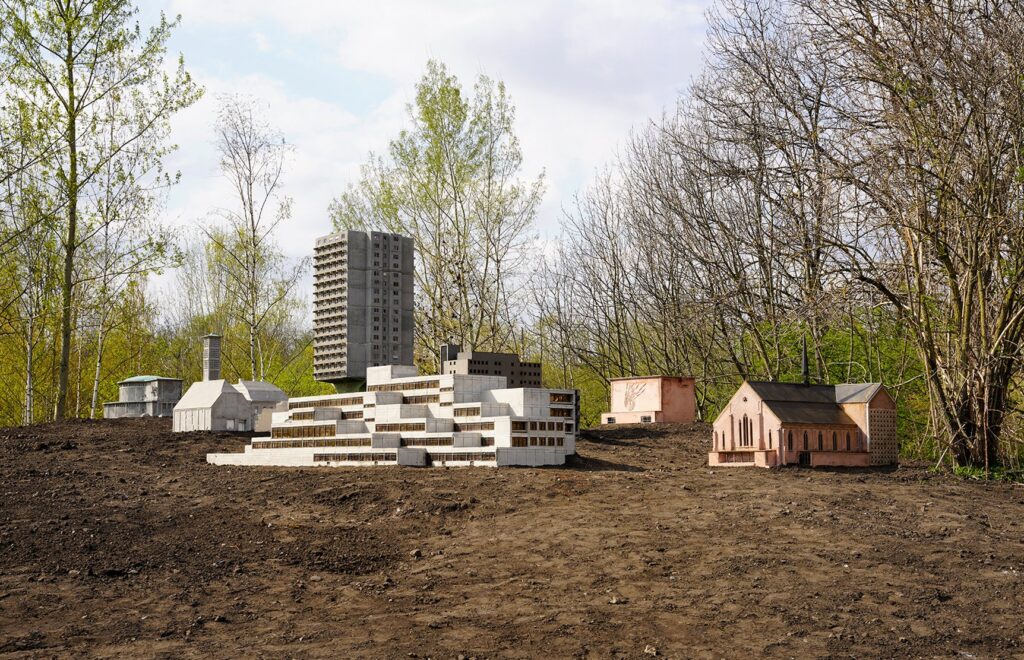 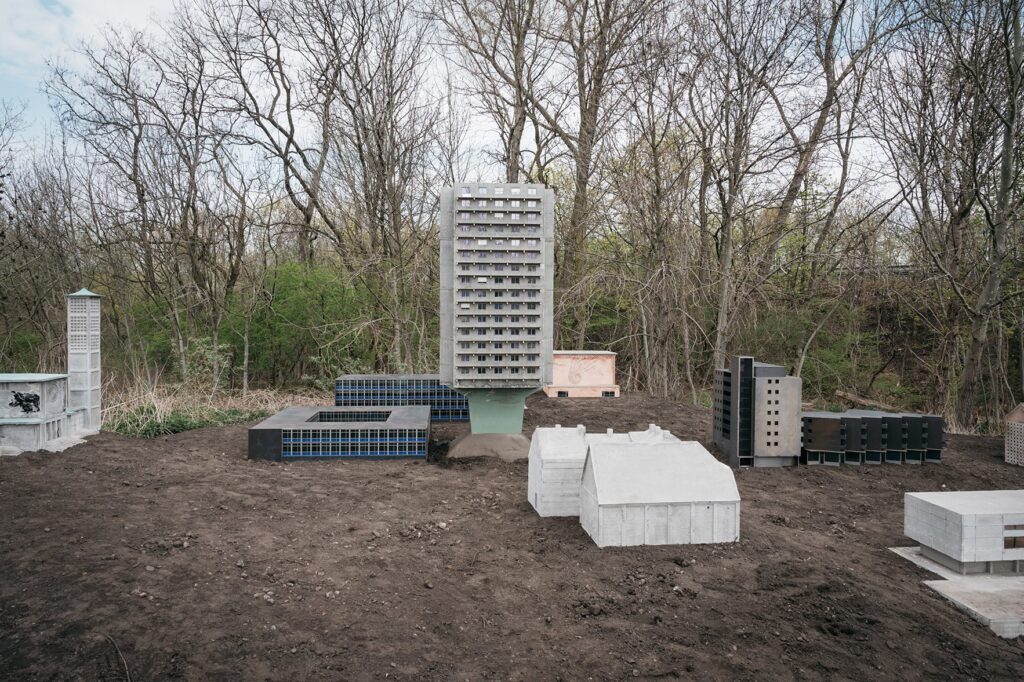 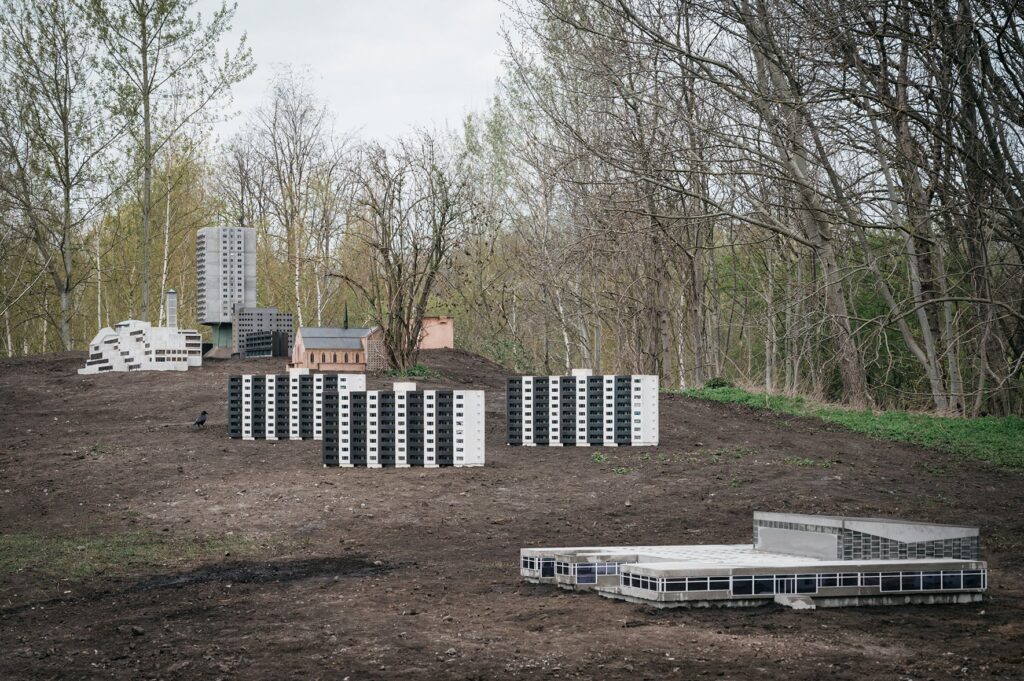 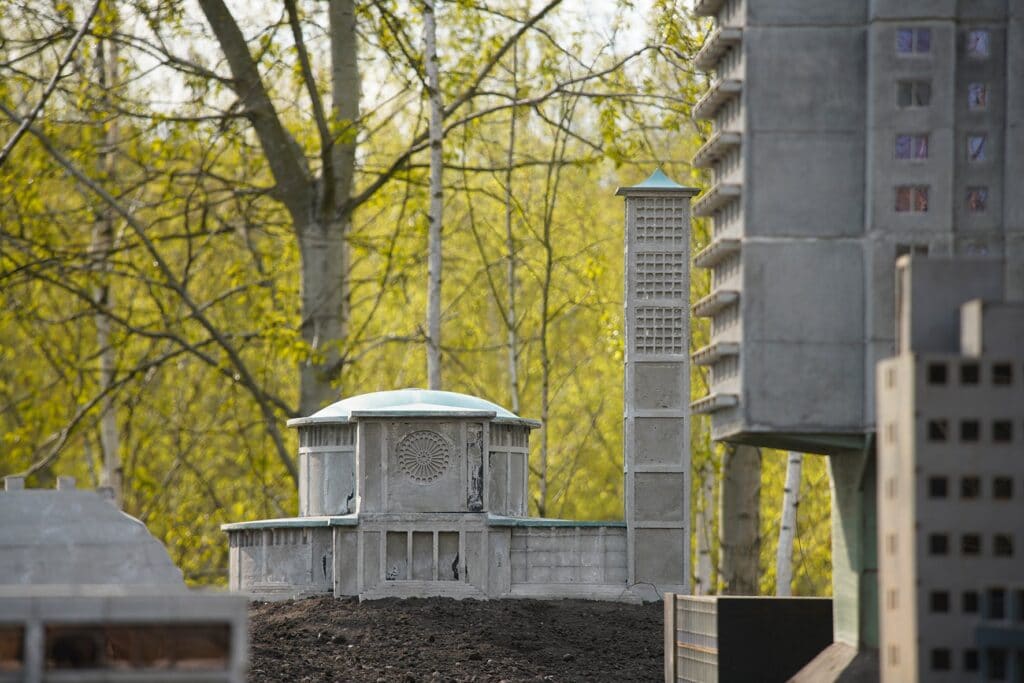 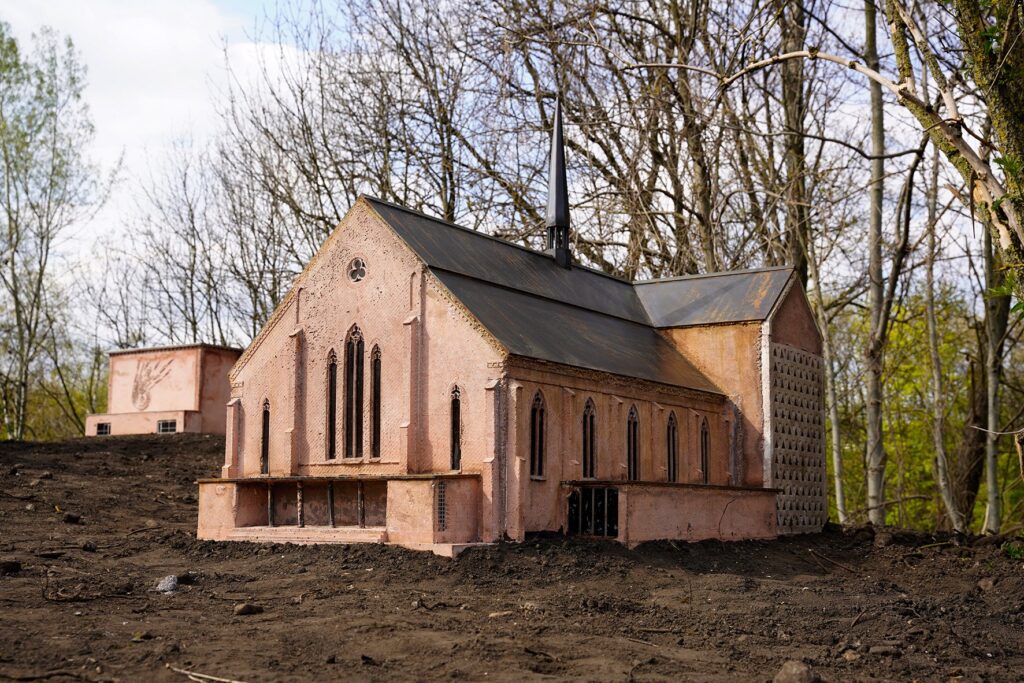 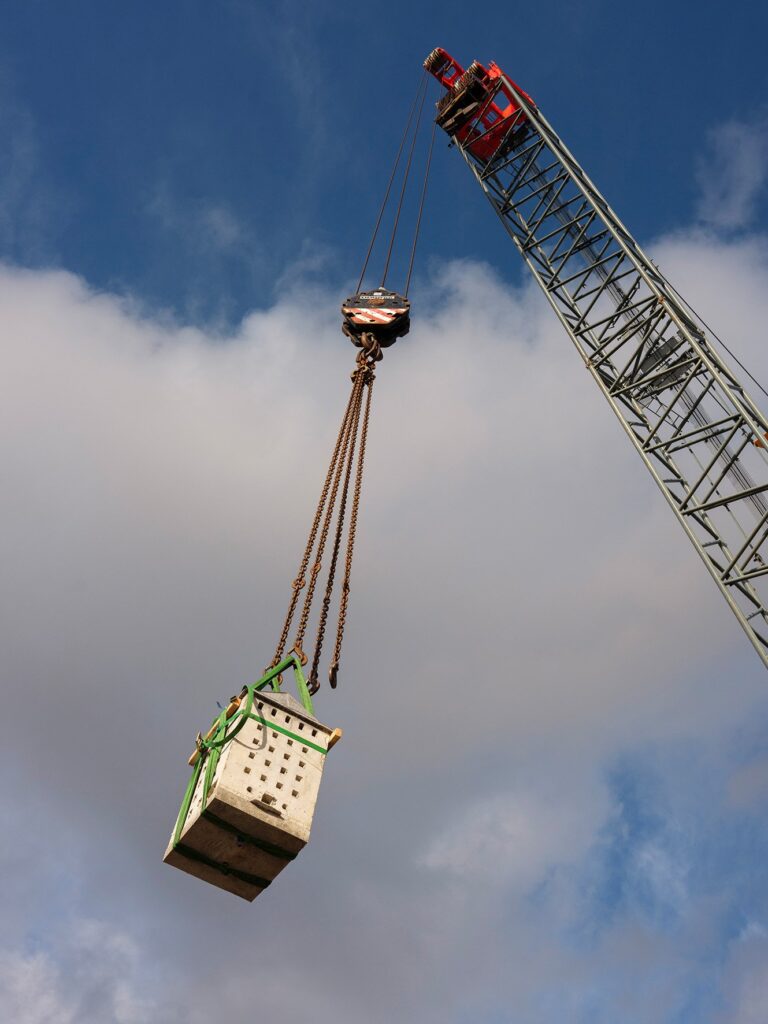 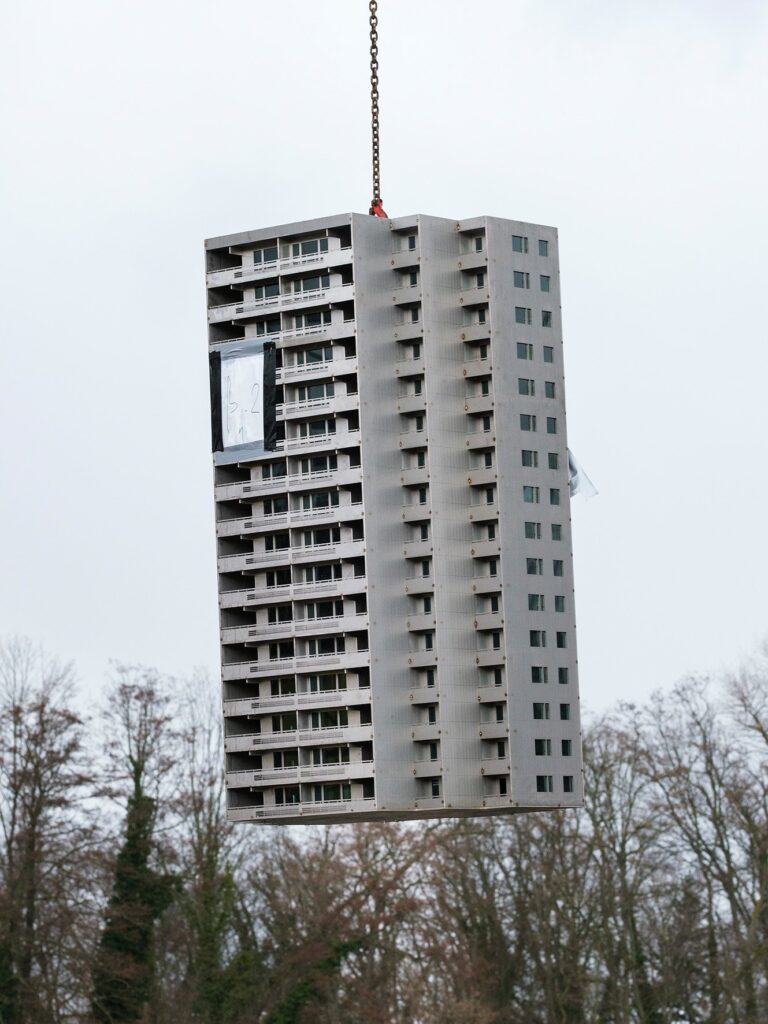 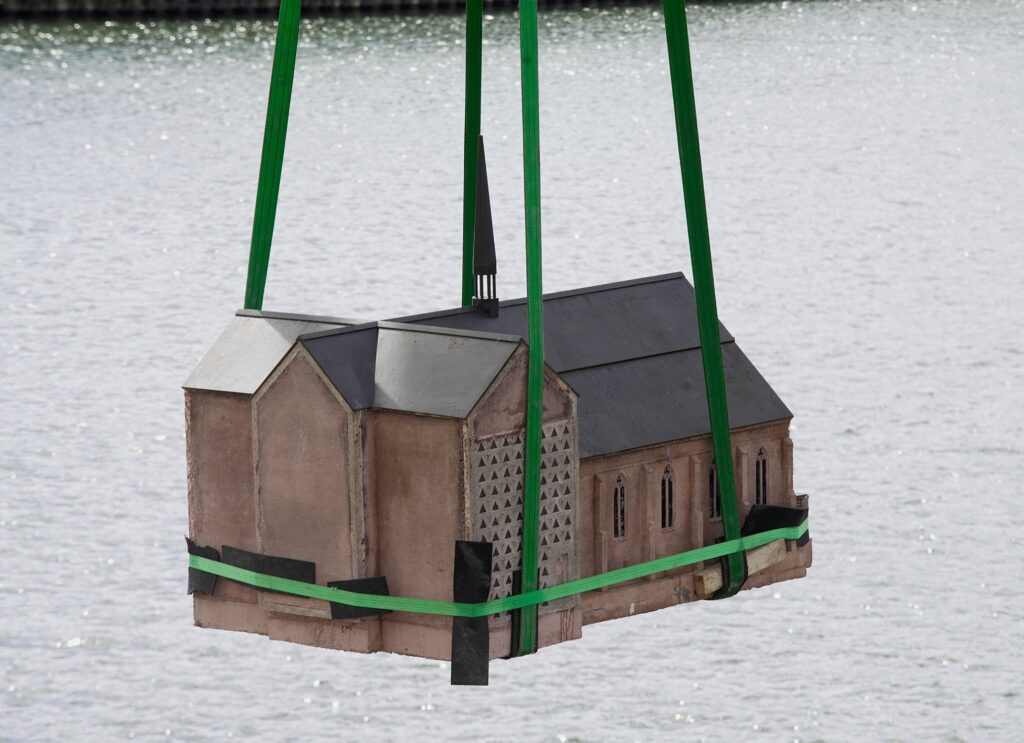 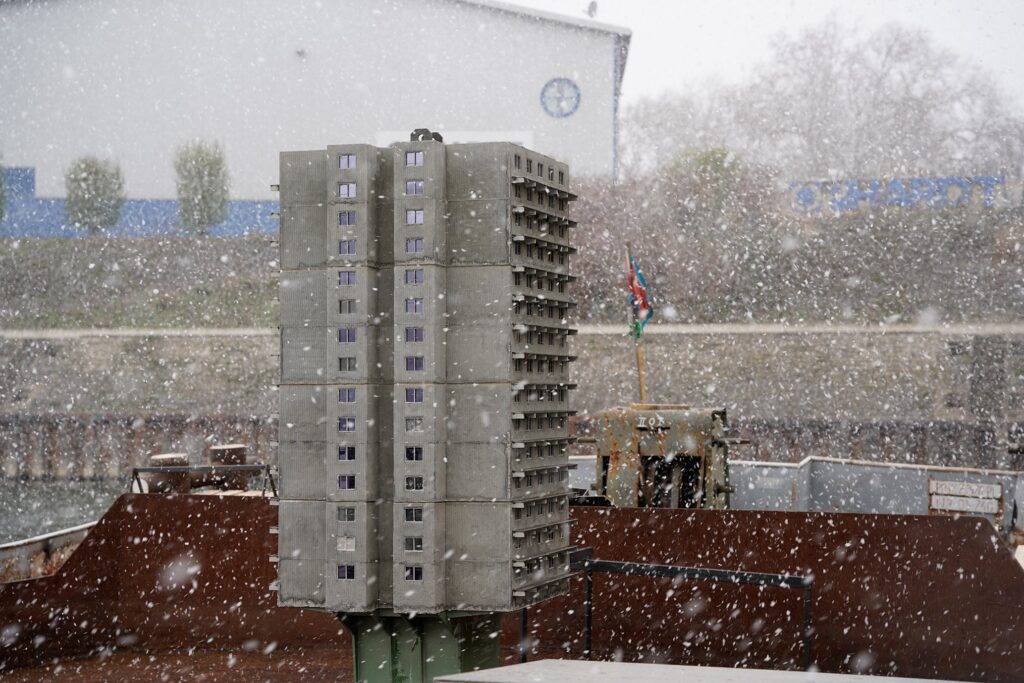 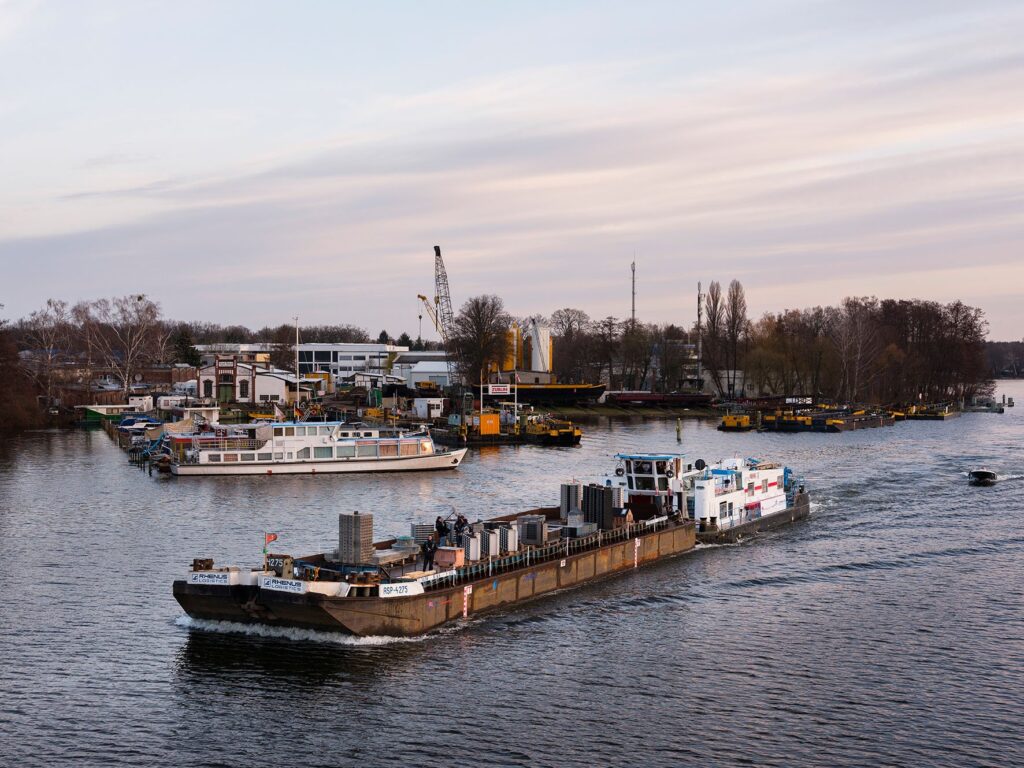