Forming 496 hoops, the spiralling bridge »Slinky Springs to Fame« coils nonchalantly across the Rhine-Herne Canal in Oberhausen. Tobias Rehberger designed the bridge as a contribution to the Emscherkunst exhibition during Essen’s year as Capital of Culture in 2010, situating it in the place where a now disappeared bridge once connected the Emscher island with the historic Kaisergarten park. Carried out by the Stuttgart-based engineering company Schlaich, Bergemann and Partners over a five-month construction period, the stress-ribbon bridge was opened in 2011. In engineering terms the bridge is a unique and highly complex construction: due to the containership traffic on the Rhine-Herne Canal the main bridge had to be placed over the canal at the unusual height of 10 metres. The fragile conditions around the bank on one side and the nature of the ground on the Kaisergarten side, where there is an old river meadow of the Emscher, posed particular challenges for the planners. In addition, the artistic design envisaged the bridge resembling a rope loosely thrown over the water with a light, wild and irregular feel. In order to achieve the construction’s desired litheness the walking surface itself was to made the supporting framework, allowing the coils to spiral freely around the structure and act as the salient visual feature of the bridge’s design. At both ends the bridge sweeps round in a broad arc, so that the entire work can boast a total length of 406 metres. The walking surface consists of a soft tartan flooring which in irregular sequence alternates through 16 different colour fields from yellow, orange, pink and red to blue and turquoise.
Named after and inspired by the popular child’s toy »Slinky« whose dynamic coils can somersault down a set of stairs, the footbridge seeks to animate not just children to take a buoyant walk across the canal. Cyclists who have biked down the Emscher trail will be greeted on the other side by the historical Kaisergarten dating back to the nineteenth century with an animal enclosure and the Schloss Oberhausen (Castle Oberhausen) that houses the Ludwig Gallery. The bridge is particularly worth visiting after sunset: with the night-time illumination of the handrail, together with 293 further LEDs installed beneath the coiling spirals, the structure comes ablaze with light, creating dramatically colourful reflections in the water.


From Oberhausen Hauptbahnhof (main station) take the 966 bus (towards Oberhausen, Neumarkt) to the stop Oberhausen, Schloss Oberhausen, then continue on foot for about 260 m through the park Kaisergarten. 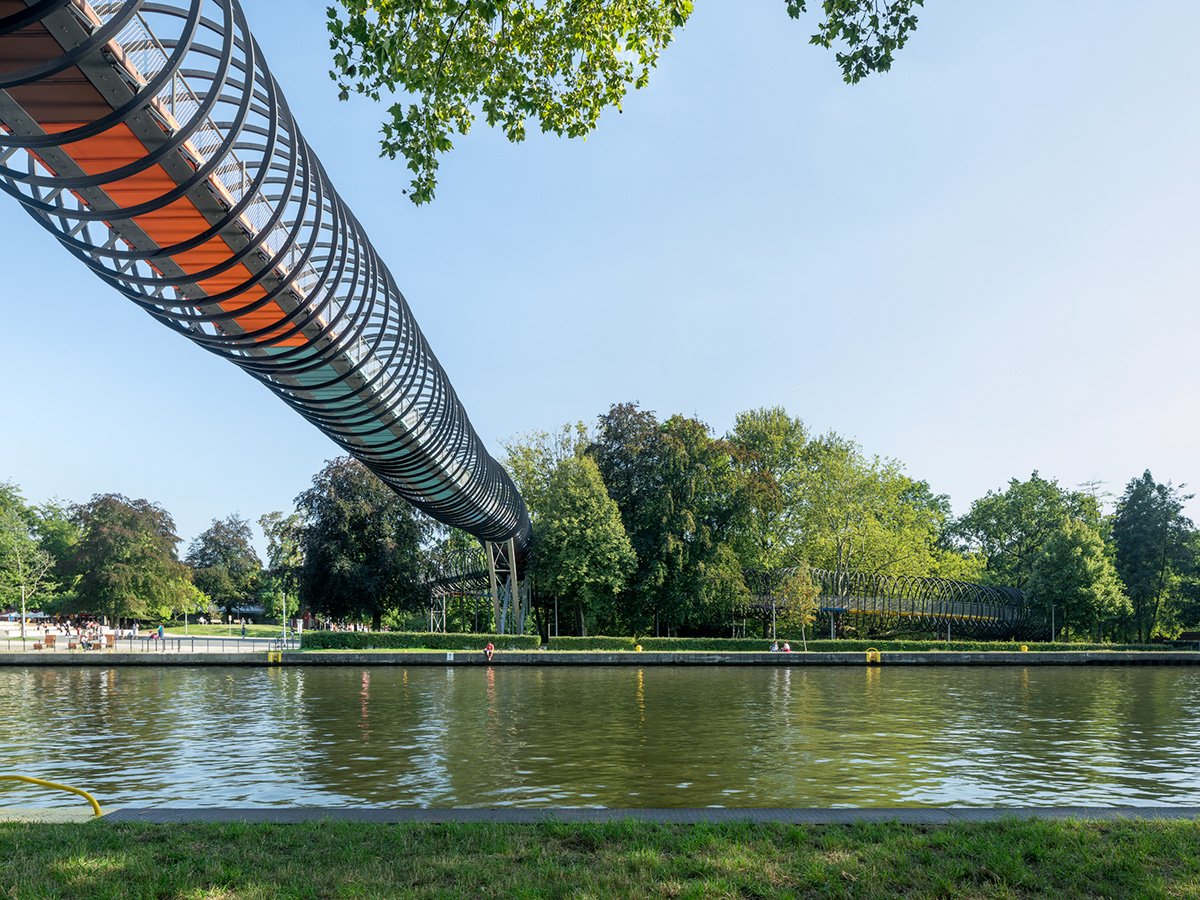 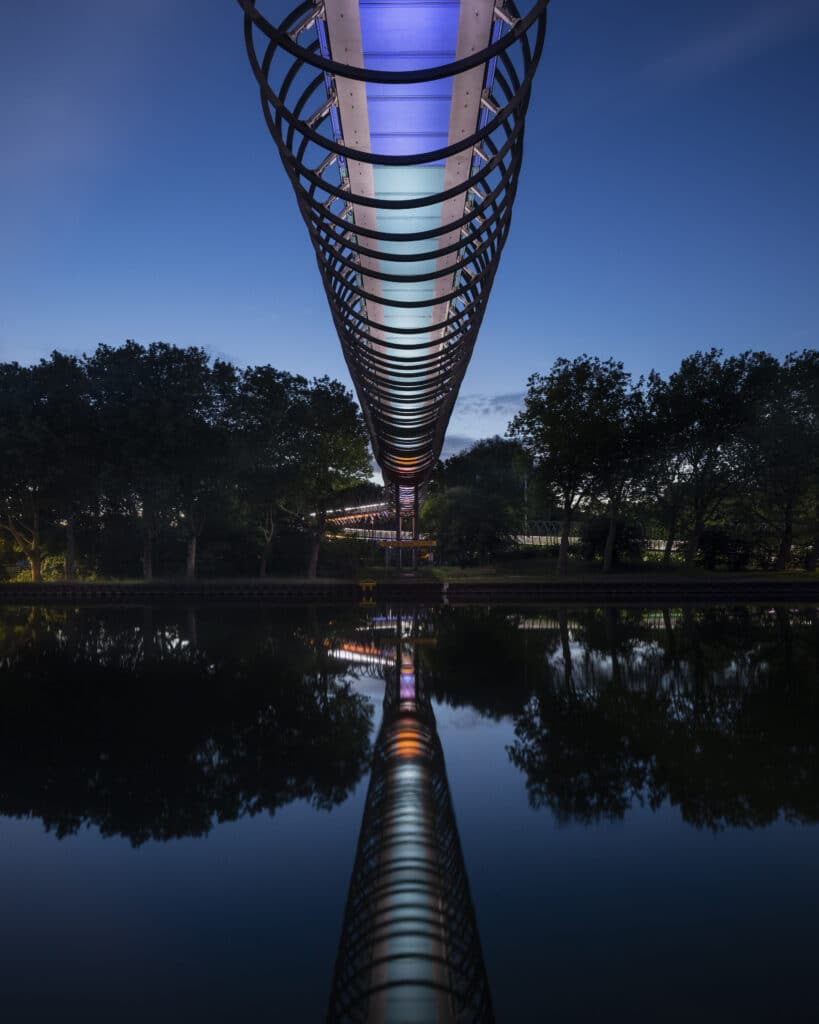 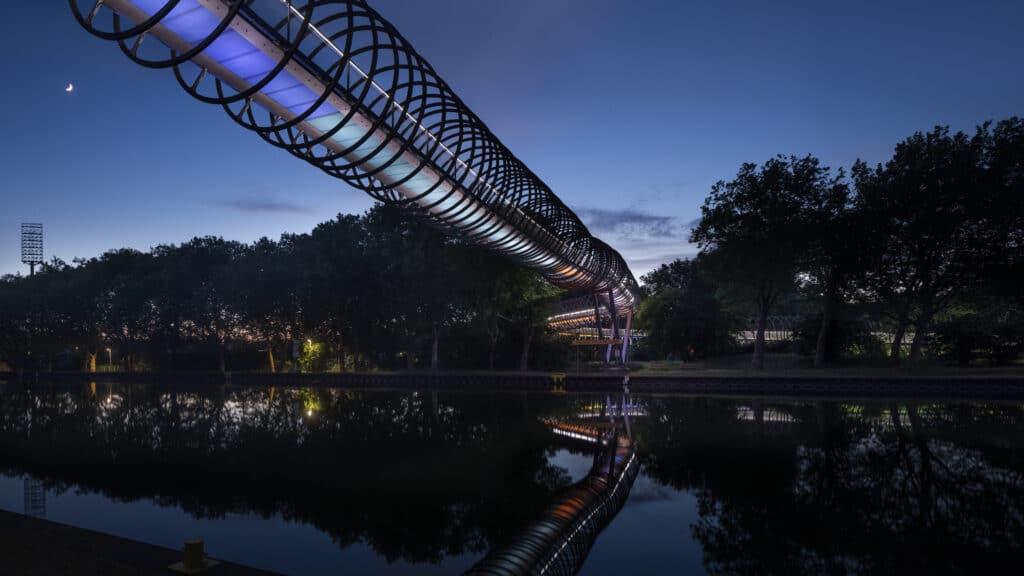 In the handrail of the railing 406 m LED light rails were installed, in 293 spirals there are lights at the bottom in the middle, so that »Slinky” shines even at night! 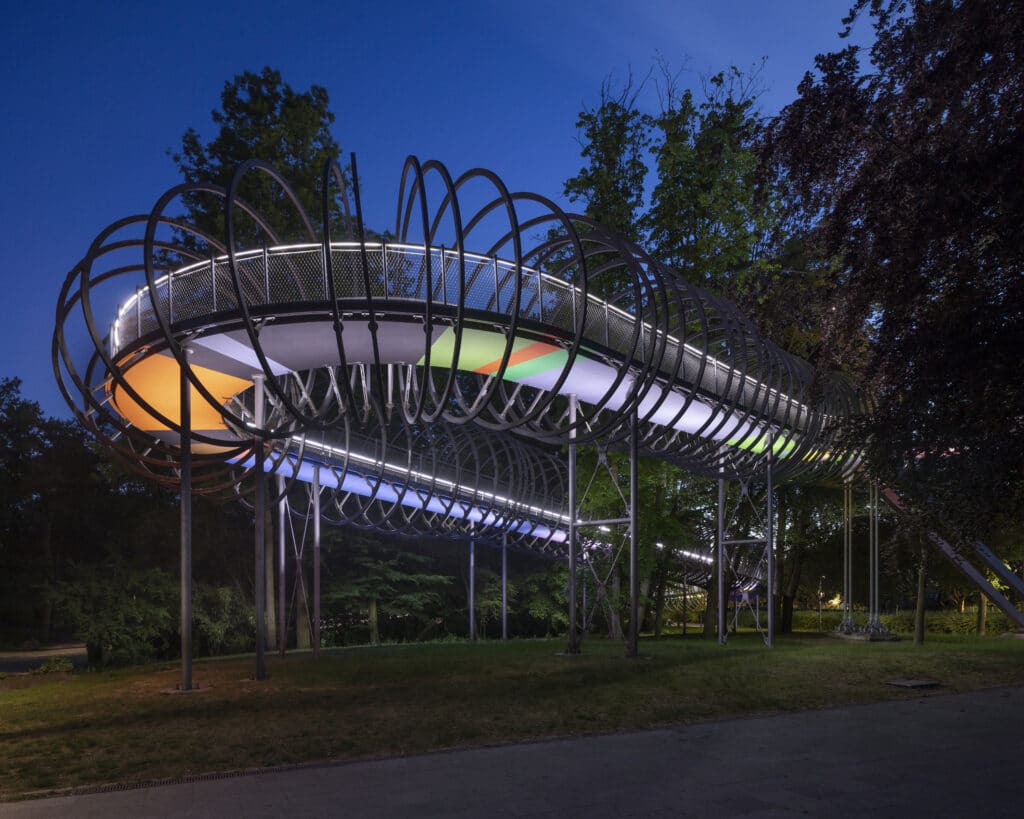 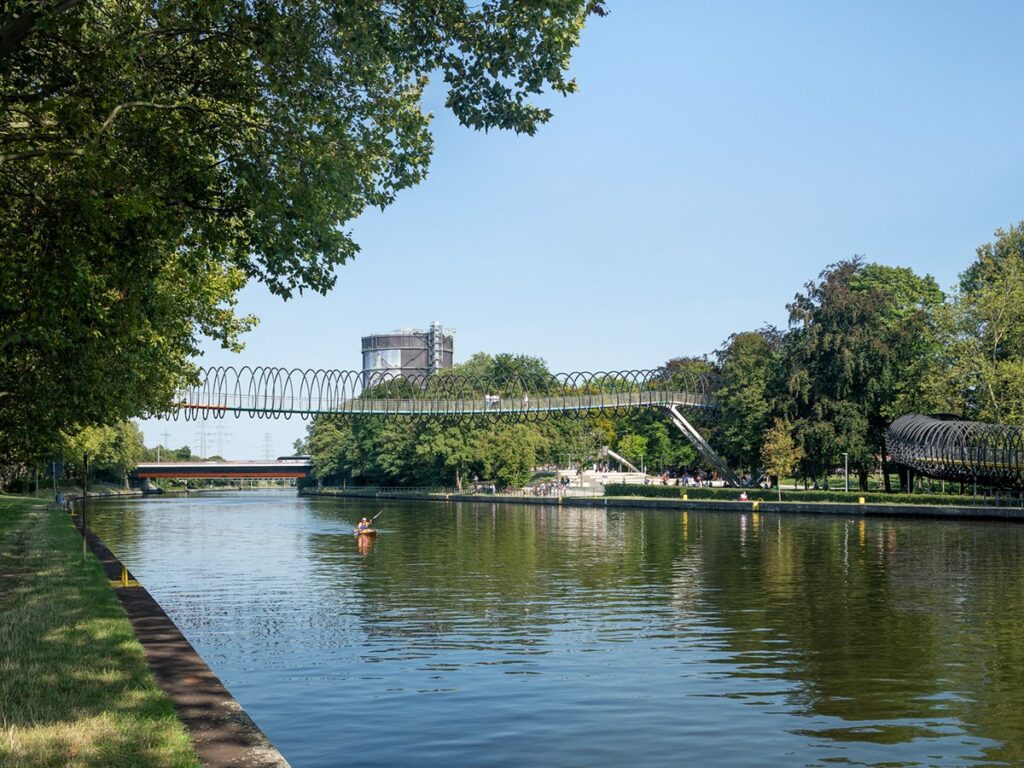 It’s not just children who like to jump over: the spiral bridge “Slinky” in Oberhausen. 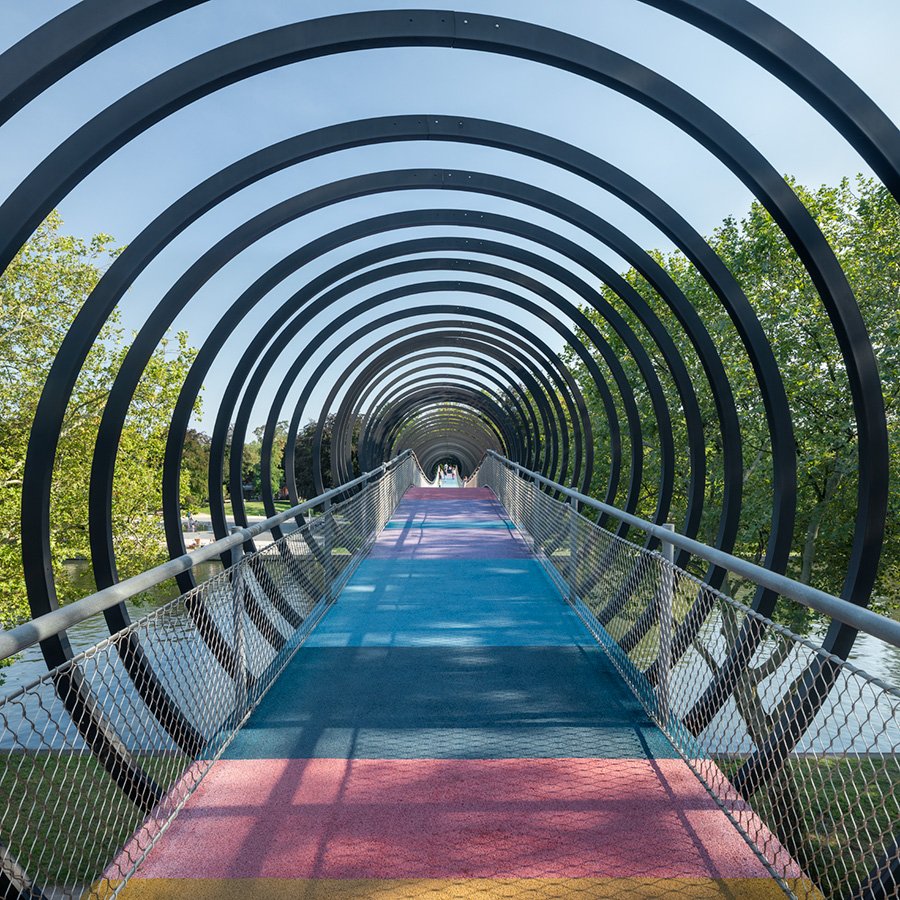 EMSCHERGRAM.
JOIN IN AND UPLOAD YOUR OWN PICTURES TO THE GALLERY.
Upload
Detlef Vordenbäumen

Tobias Rehberger (*1966 in Esslingen, DE) is known as a boundary-crosser between art, architecture and design. Currently based in Frankfurt am Main, the artist studied there at the Städelschule under Martin Kippenberger and Thomas Bayrle. He has also been teaching at the school as professor for visual art since 2001. He has executed numerous installations in public space. In 2009 he was awarded a Golden Lion for his design of the cafeteria in the Giardini, the central hub of the Venice Biennale. Since May 2015, the sculptural path » 24 Stops« featuring his works connects the Fondation Beyeler in Basel with the Vitra Design Museum in Weil am Rhein.