Being a flat, languid river, the Emscher was never suitable for industrial inland shipping, even though in the process of being straightened it was debated whether it should be converted for this purpose. Instead, in the early 20th century the Rhine-Herne Canal was constructed, which today is still one of the busiest freight transport routes in the Ruhr region and in part courses through the Emscher’s old riverbed. Beginning in Castrop-Rauxel, the canal widens increasingly towards the Herne-Ost Lock where it joins the so-called Herner Meer (Herne Sea). Here, positioned at the end of a jetty, is a work of art by Bogomir Ecker. The artist conceived the three-part ensemble with the seemingly cryptic title »reemrenreh (kaum Gesang)« for the 2010 Emscherkunst exhibition and placed it directly in the lake. 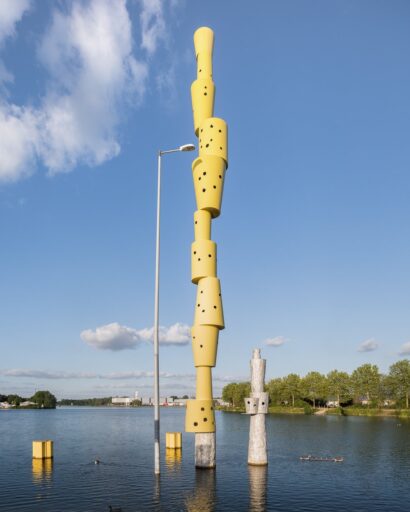 The large sculpture appears almost provisional, as if it were to challenge the limits of stability, gravity and statics.

Cylindrical and cone-shaped yellow forms are stacked to form an approximately 23-metre-high construction. With its bright yellow surfaces and impressive height, the work’s perforated hollow bodies are also dubbed locally the ›cheese straw‹. Whistling through the holes, the wind produces sounds but »barely no singing«, as the title suggests. But read backwards, the title reveals the work’s location: Herner Meer (Herne Sea). Jutting out of the water alongside the yellow edifice that is visible from afar is another sculpture, a kind of ›little sister‹ in grey. At night the group of figures is lit up by a – seemingly – ordinary street lamp. In reality, standing 16 metres high, it towers above its roadside colleagues, which generally reach heights of just three to six metres. Yet in this spot the lamp truly looks too small in relation to the yellow sculpture.

As early as 2009, Bogomir Ecker created a formally similar, monumental sculpture for public space in Brussels. His work »Aliud« (meaning ›something other‹ in Latin) in the Duisburg inner harbour also bears formal resemblance to »reemrenreh (kaum Gesang)«, but is suspended mid-air from a steel girder between two buildings. Likewise, with its seemingly makeshift composition »reemrenreh (kaum Gesang)« also appears to defy gravity. One cannot help wondering whether the water it is standing in really makes for a suitable base or on what it is actually mounted. These abstract figures that somehow look like gadgets and have strange titles are typical of Bogomir Ecker’s sculptural work. Here too, the sculpture retains a disconcerting quality, even if, when viewed from a distance, it marks the jetty as a threshold between the yacht harbour and the lock.


From Herne Hauptbahnhof (main station) with bus 321 (towards Bochum Schwerinstr.) to the stop Herne IGZ Friedrich der Große, then continue on foot for about 1,2 km. 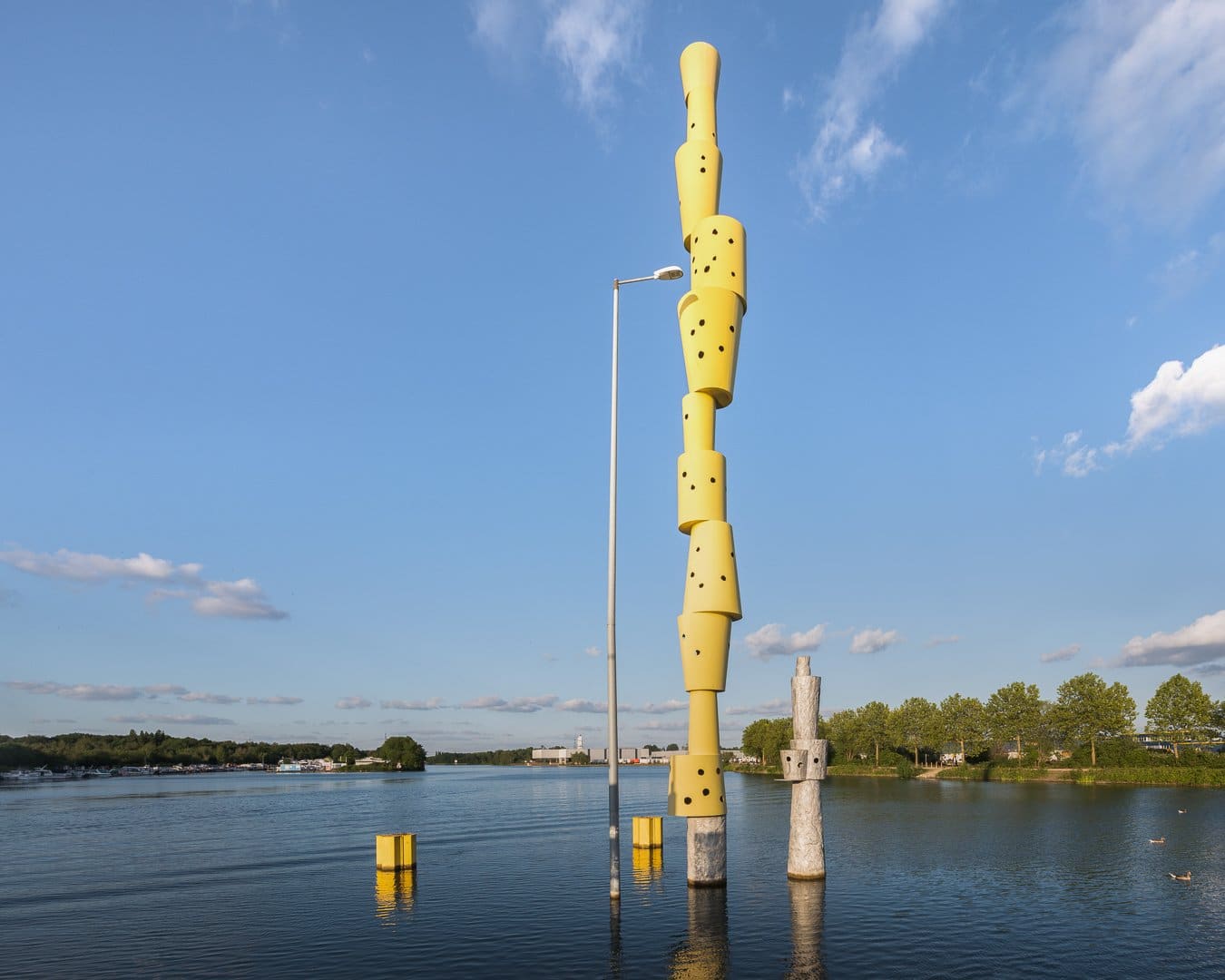 »The listener is accompanied by sounds and sound ornaments, familiar or irritating sounds from everyday life. Machines speak to us from nowhere as if from a utopian future. Market screamers from distant countries advertise their goods. Gradually, the towers in the water begin to creak, blow and whistle like titans, tune into the opera in the countryside and move away without a finale […]« 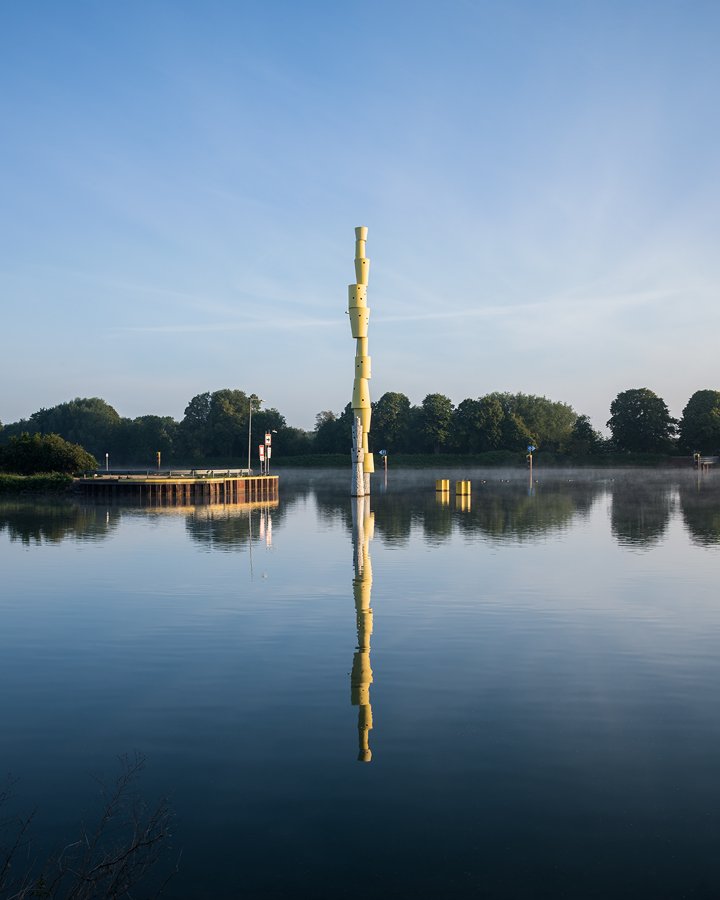 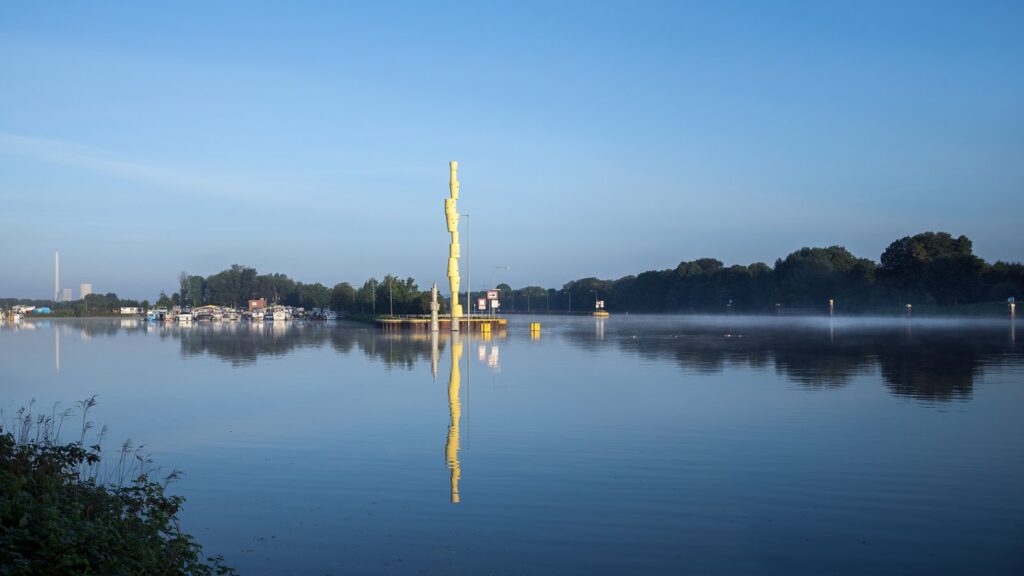 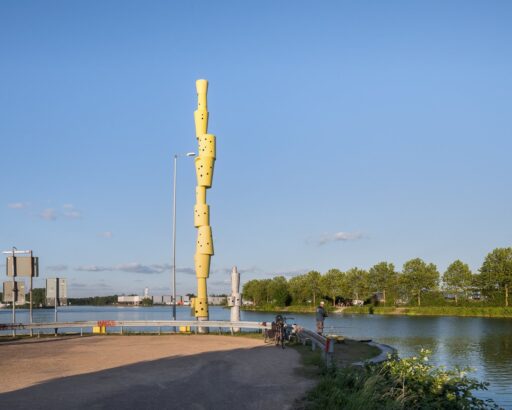 Bülent Kullukcu developed a composition for the installation, which additionally created a sound space along the pier during the three-month period of Emscherkunst 2010.

EMSCHERGRAM.
JOIN IN AND UPLOAD YOUR OWN PICTURES TO THE GALLERY.
Upload
Detlef Vordenbäumen

»I don’t know exactly what public space really means for me. It is a lot already if one succeeds in raising a temporary, tentative question in it, even if just for a second. Given that, temporary answers are also interesting because in that moment, in that second, a colossal idea can address you.«

Bogomir Ecker (*1950 in Maribor, SI) followed his training as a typesetter by studying at the State Academy of Fine Arts Karlsruhe, then at the Kunstakademie Düsseldorf. At the HfBK Academy of Fine Arts Hamburg he held a chair for sculpture. From 2002 until his retirement in 2016, he was professor at the Braunschweig University of Art.
The point of departure for his artistic explorations are social motors such as communication and technology; in particular, seeing and hearing as forms of sensorial perception play a major role.
Bogomir Ecker was invited in 1987 to show work at documenta 8 in Kassel and is represented in numerous collections.