Julius von Bismarck is one of the first artists to have been invited to develop a new work for the Emscherkunstweg, which was inaugurated in 2019. Together with the artist and architect Marta Dyachenko he conceived the installation »Neustadt« (New City), which is located on a grassy area in Landscape Park Duisburg-Nord, between the Alter Emscher river, the cycle track Grüner Pfad (Green trail) and the A42 motorway.

Altogether 23 sculptures make up a fictive town that has been assembled from 1:25-scale models of various real buildings in the Ruhr region which have been demolished since 2000. The choice of types and functions of building was not based on any rigorous system but followed aesthetic and sculptural criteria and the wish to show a cross-section of local urban architecture.

In addition to a block of flats from Essen dating back to the gründerzeit period, there is, for instance, a residential complex from a former model estate in Marl built in 1965, while further residential units in a prefab plattenbau style speak of social history in the 1970s. The  Paulskirche church in Duisburg or St. Joseph’s Church in the Kupferdreh district of Essen, built in 1904 in neo-Gothic style and torn down in 2015, are both examples of the social change that has also taken place within religious congregations. The sculptures of the Volkshochschule (adult education centre) in Essen with its unusual tiered architecture and washed concrete reliefs on the façade, or of the indoor swimming pool in Marl – once celebrated examples of post-war architectural modernity – raise questions as to the relationship between preservation and demolition. 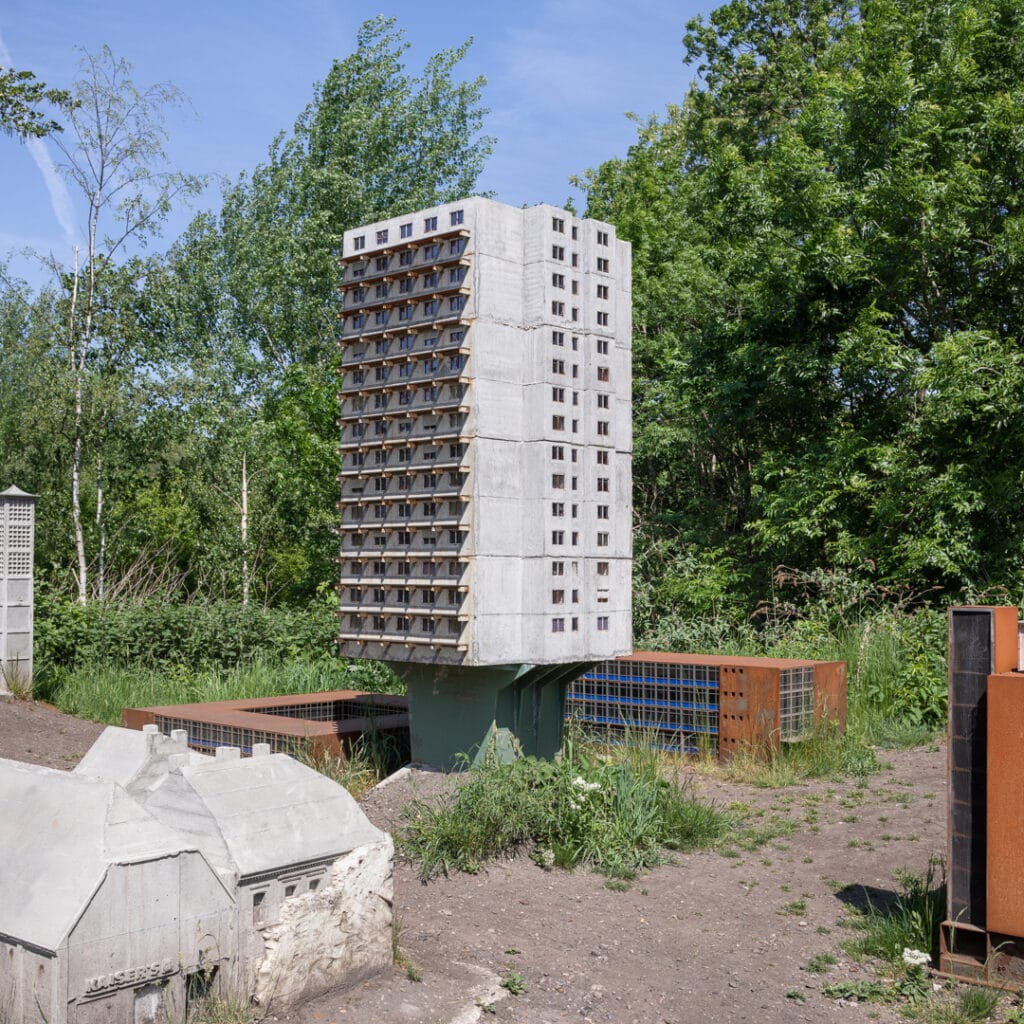 The sculptural installation has been consciously integrated into what appears to be fallow land, yet which in fact was landscaped as part of the IBA (International Architecture Exhibition) Emscher Park in the 1990s, and thus – in addition to the dramatic shifts in scale – reflects the relationship between nature and culture. »Neustadt« evokes numerous associations and memories, but also prompts us to explore questions about urban planning as well as the environment, which likewise are mirrored on a broader scale in the structural change of the Ruhr region and the Emscher river conversion. 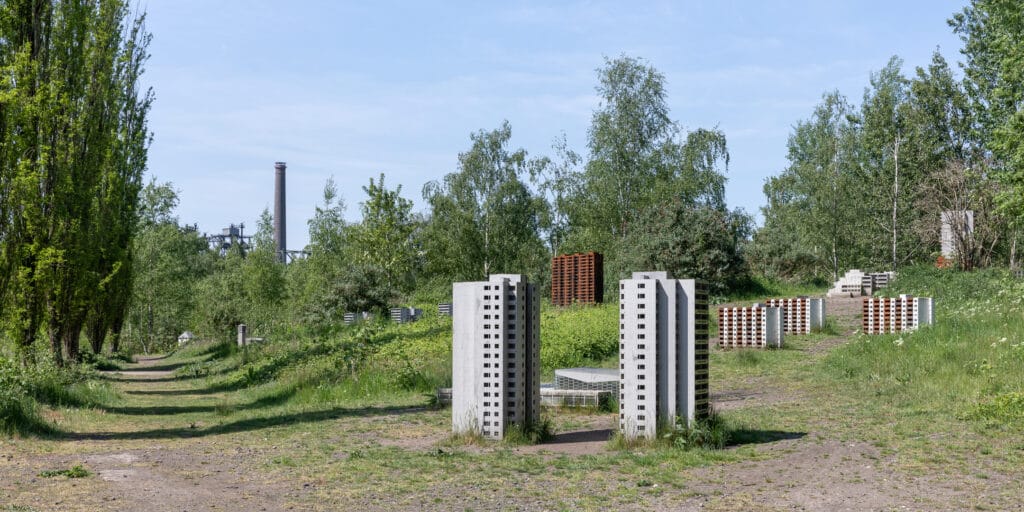 During the construction of »Neustadt«, the Emschergenossenschaft was supported by the Kramer Group Dortmund and BERDING BETON.
Address
Emscherstraße 71
47137 Duisburg


From Duisburg Hauptbahnhof (main station), take the 903 tram (towards Dinslaken station) to the stop at Theodor-Heuss-Strasse, then continue on foot for about 200 m, before turning left onto the »Grüner Pfad« (Green trail), passing beneath the motorway underpass.

The artwork is located between the Landschaftspark Duisburg-Nord, the Emscherpromenade and the »Grüner Pfad«, in northeast of the big parking spot. 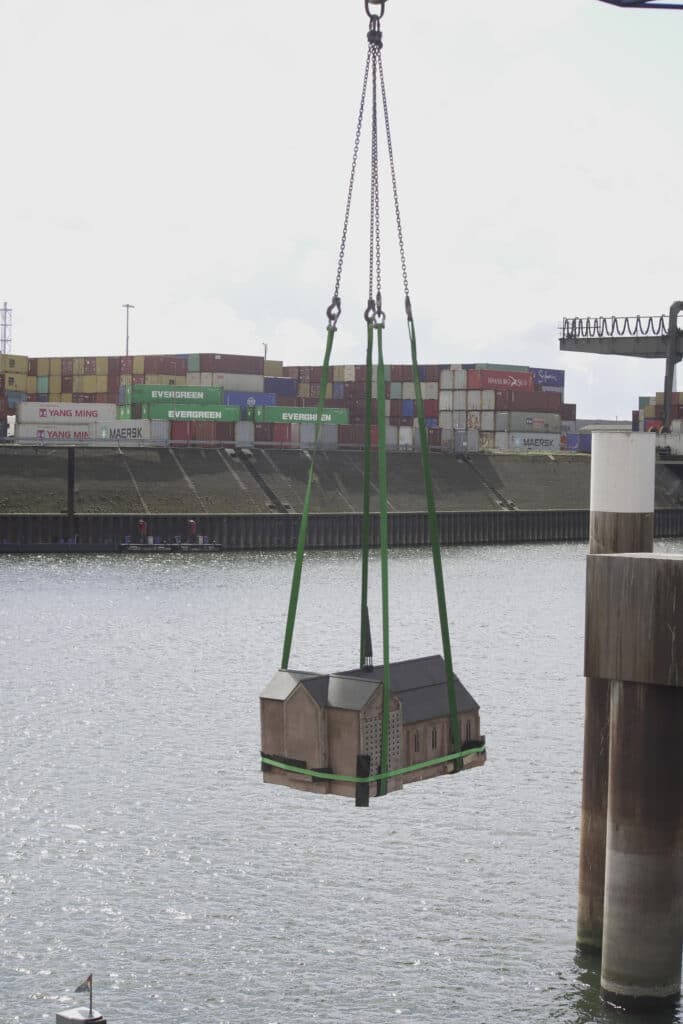 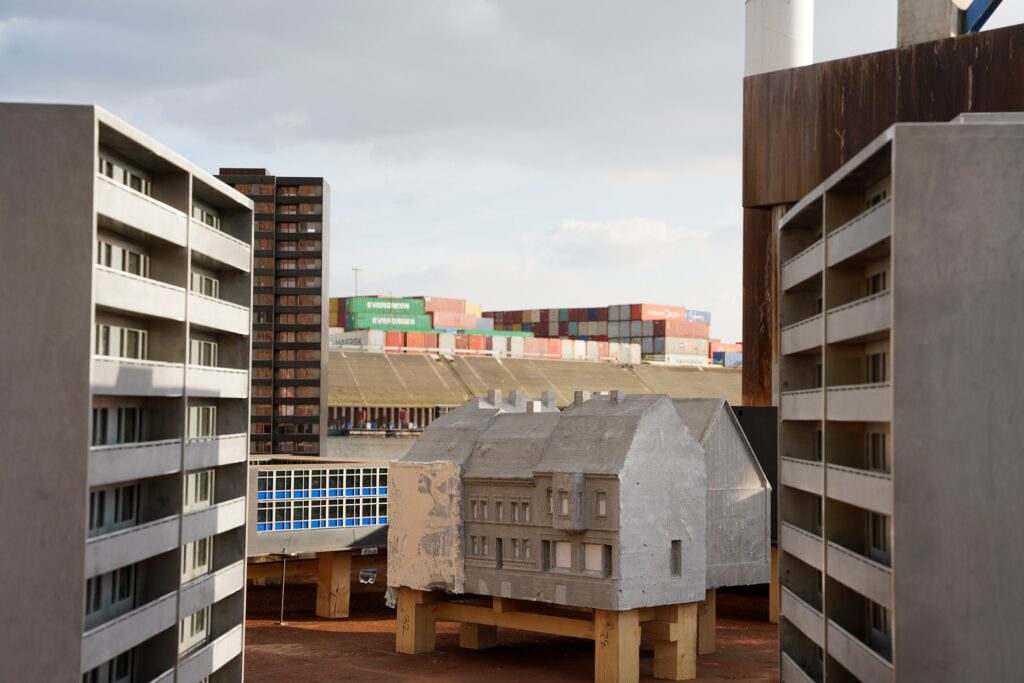 As part of the artistic concept, the building sculptures were transported by barge from Berlin to Duisburg. 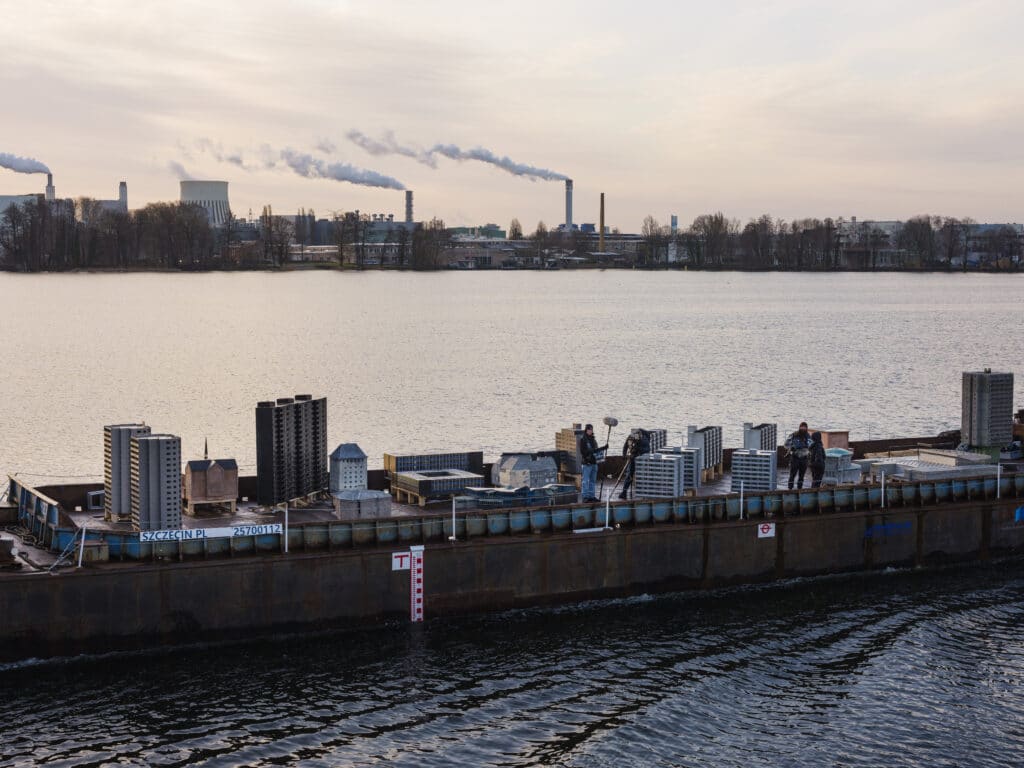 EMSCHERGRAM.
JOIN IN AND UPLOAD YOUR OWN PICTURES TO THE GALLERY.
Upload
HERRSCHMITZ

»I think a lot about aesthetics in public space and the question of who decides what looks how and what effect it has on the people who live in that space.«

Julius von Bismarck (*1983 in Breisach am Rhein, Germany) studied visual communication at the Berlin University of Arts, participated in the MFA Programme at Hunter College New York, as well as studying at Ólafur Elíasson’s Institute for Spatial Experiments. Among the awards he has received are the IBB Photography Award (Berlin), the Golden Nica des Prix Ars Electronica (Linz), the Prix Ars Electronica Collide@CERN (Linz) and the “Junge Stadt sieht junge Kunst” (A young city sees young art) award (Wolfsburg). Julius von Bismarck works on the boundaries between art, science and technology. He investigates the perception, manipulation and documentation of natural phenomena, but also issues of urban space.

Marta Dyachenko (*1990 in Kiev, Ukraine) studied architecture and fine arts, specialising in sculpture at the Berlin University of Arts, among others under Arno Brandlhuber and Manfred Pernice. Her installations frequently involve interventions in landscape settings with model-like sculptures. In her artistic work a predominant role is played by her preoccupation with the relationship between nature and human activity, particularly our socially constructed view of landscape.