As the site for her contribution to the 2010 Emscher Art exhibition artist Silke Wagner chose the former sewage plant in Herne. Besides BernePark and the disused sewage plant in Läppkes-Mühlenbach, it is one of the three decommissioned sewage treatment facilities located between Emscher river and the Rhine-Herne Canal that have been preserved as publicly accessible sites. In a wall mural covering an area of 600 sq. m. on the outer shell of the gutted, former digestion tank of the sewage plant the artist depicts scenes from the miners’ protest movement in the Ruhr region. The mural’s monochrome blue-and-white colouring is inspired by the tiling in pithead baths and the traditional patterns of miners’ towels.
Starting with the first mass strike in 1889 and ending with the 2007 decision to stop subsidies to the coal mining industry, the wall mosaic displays keywords and images based on archive and newspaper photographs to depict important events in the history of mining protests. As part of her research Silke Wagner closely collaborated with the historical archive of the »Haus der Geschichte des Ruhrgebiets« at Ruhr-University Bochum. In 2010, this cooperation gave rise to a »Protestzeitung« (protest newspaper) to accompany the wall mural, documenting the history of miners’ protests in greater detail. Inspired by the miners’ protests and strikes, solidarity campaigns and politicising developments spread throughout Germany. In the course of the 20th century these crucially contributed to society’s advancing democratisation. With this work Silke Wagner has erected a kind of monument to the politically committed miners and their labour, seeking to preserve their memory beyond the closure of Germany’s last colliery in 2018.

In addition, the location of the disused sewage treatment plant in Herne brings into focus the achievements of wastewater technology, which are also closely tied to the history of coal mining in the Ruhr and have helped significantly to improve the living conditions of people in this region. Accordingly, at the time of its construction in the 1920s, the plant in Herne was considered one of the most progressive of its kind.


From Herne Hauptbahnhof (main station) take the S20 (towards Recklinghausen Hauptbahnhof) to the stop Herne Kanalbrücke, then continue on foot for about 550 m. 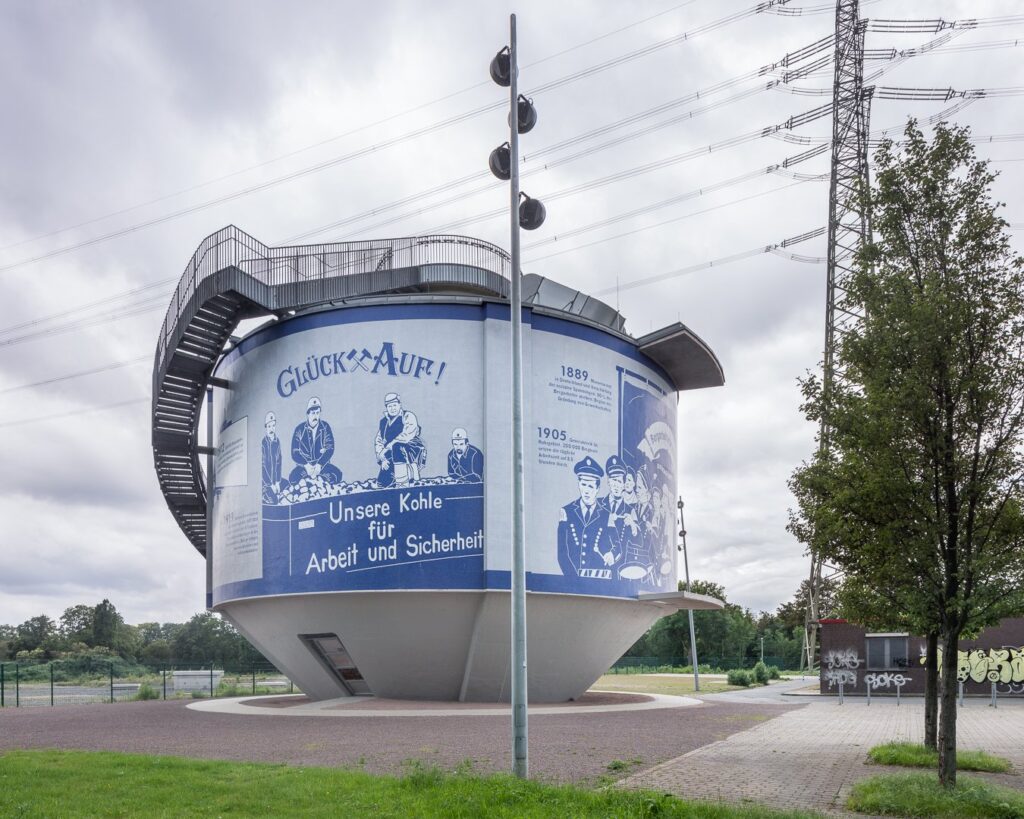 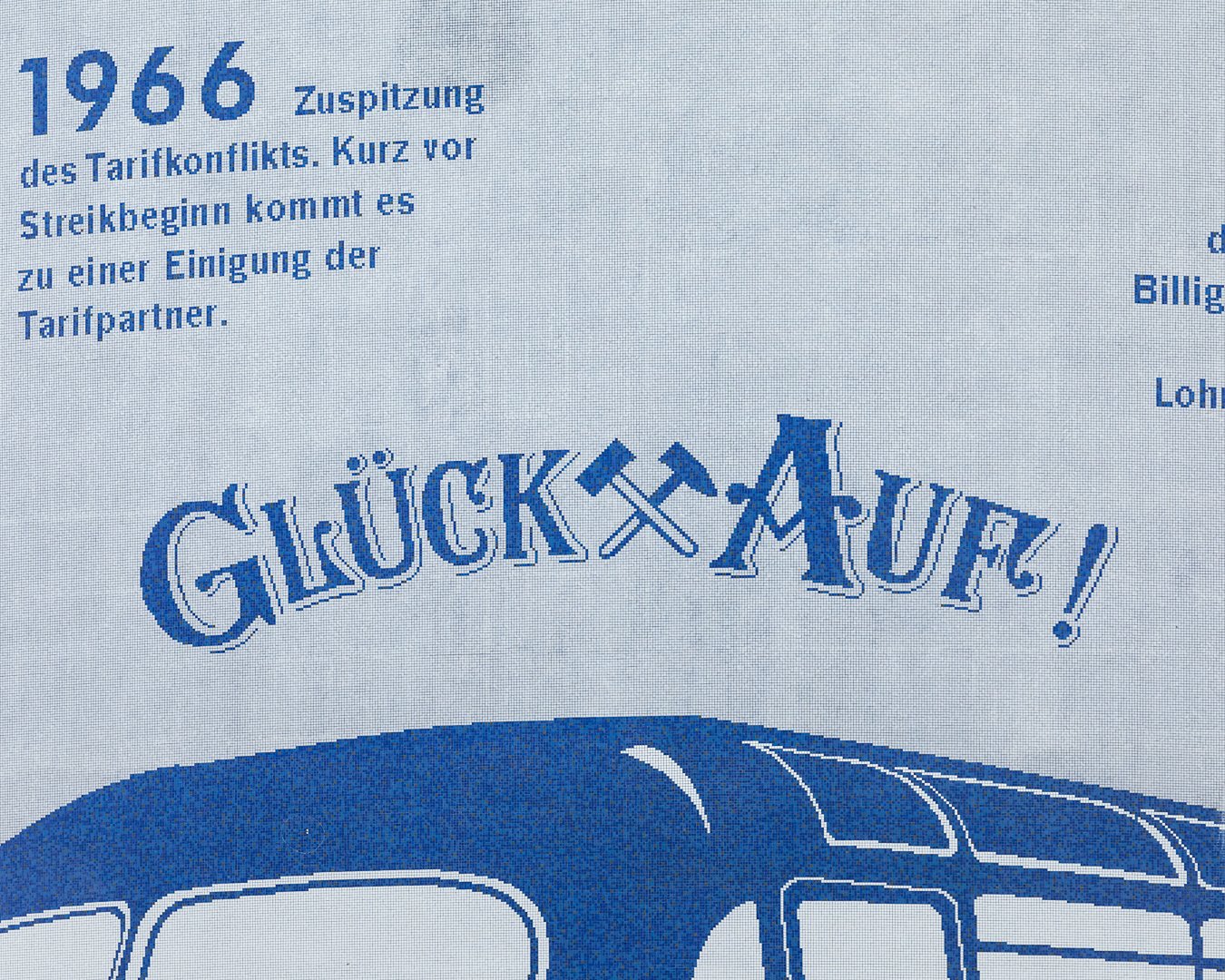 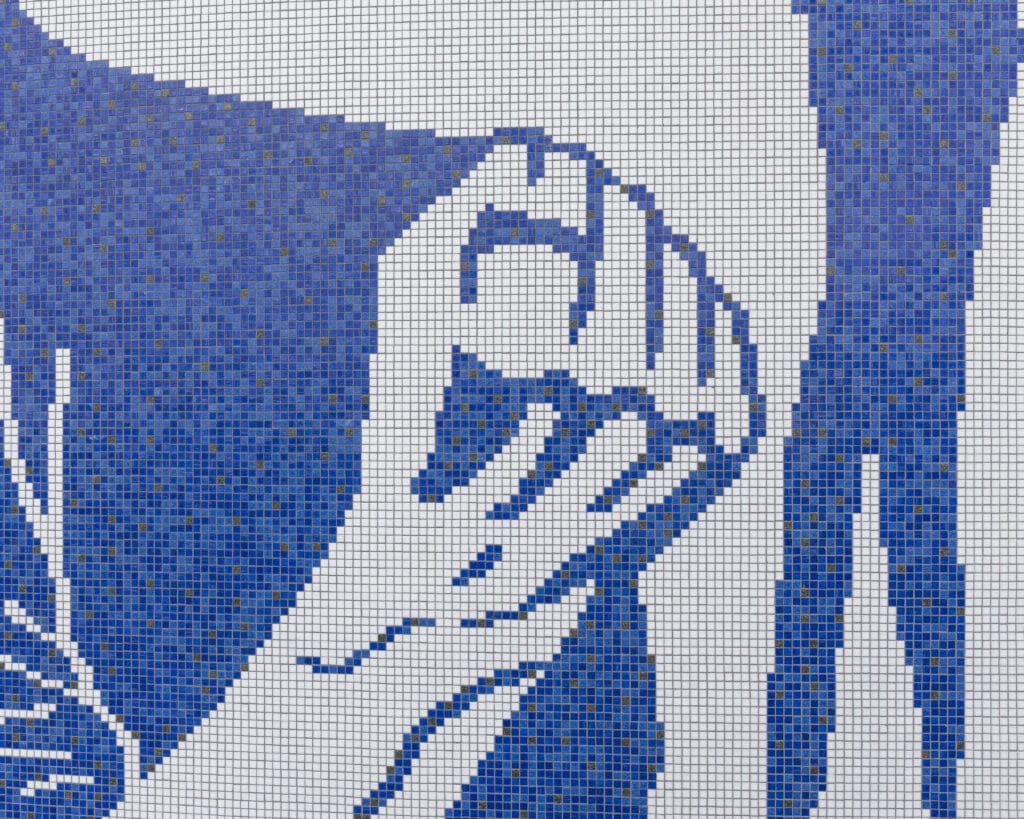 Around 5.8 million stones are installed in the mosaic.

At the disused sewage treatment plant in Herne, the monumental mural on an old rotting container tells the story of the miners’ protests. 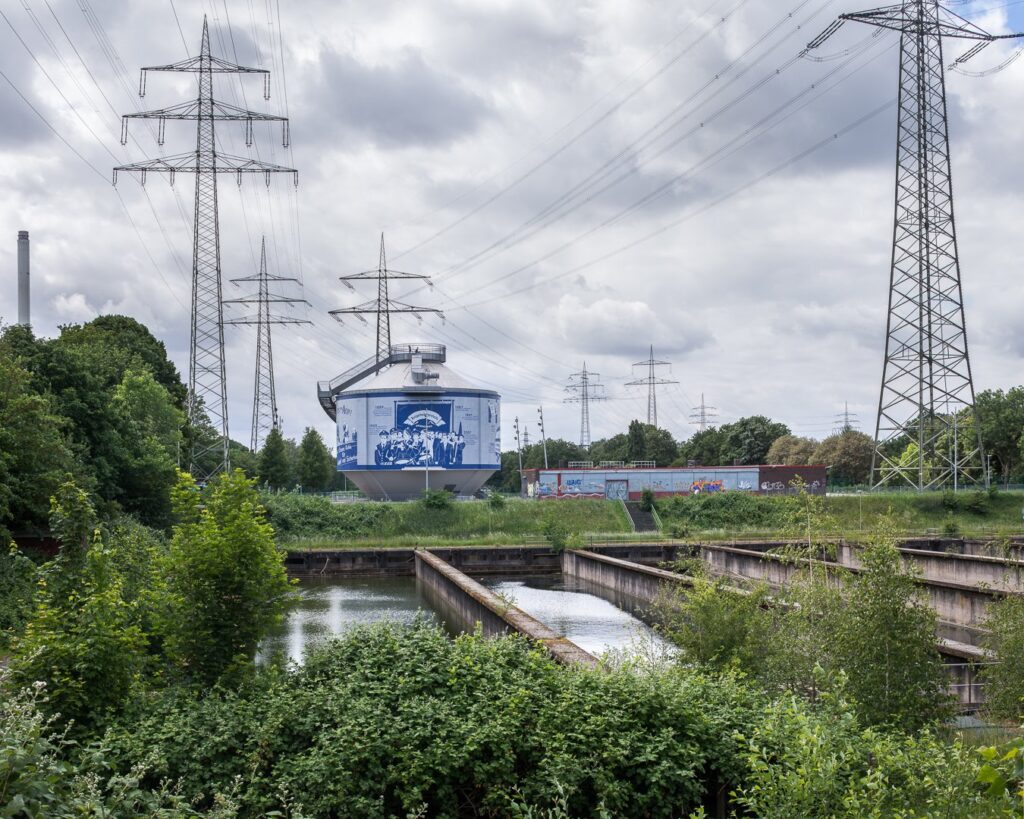 »Creating a coat for something that already has such a sculptural presence as the gutted digestion tower on the sewage treatment plant was perfect for me.«

Silke Wagner (*1968 in Göppingen, DE) creates conceptual works exploring social, political or ecological issues. Her works are always preceded by extensive research, for which she frequently collaborates with different social groups or actors. Another of her works for public space is located in the centre of Münster: »Münsters GESCHICHTE VON UNTEN« (Münster’s HISTORY FROM BELOW) was created in 2007 for skulptur projekte münster.