In the Ruhr region there are over 250 waste tips – up to 140 metres high, artificial mountains of mining waste, slag and rubble – witnesses to mining and industrial history. Since the late 1980s many of these tips have been transformed as part of the Internationale Bauausstellung (International Architecture Exhibition, IBA) »Emscher Park«, with some of them made over into sites for monumental installations. The first large-scale sculpture was Raimund Kummer’s 1987 work »Schwelle« (Threshold) in Essen; this was followed in 1998 by Richard Serra’s »Bramme für das Ruhrgebiet« (Slab for the Ruhr) on top of the Schurenbachhalde waste tip. In her contribution to the 2010 Emscherkunst exhibition, sculptor Rita McBride responded to the two monumental sculptures by her male colleagues with a less ostentatious gesture. At a nondescript crossroad between the Emscher river and the Rhine-Herne Canal in Altenessen the artist installed a 14-metre-high, gleaming black obelisk. Its title, »Carbon Obelisk«, simply describes form and material.

The black-glossy surface of the obelisk is made of carbon. The composite of carbon fibers is extremely light and shatterproof. 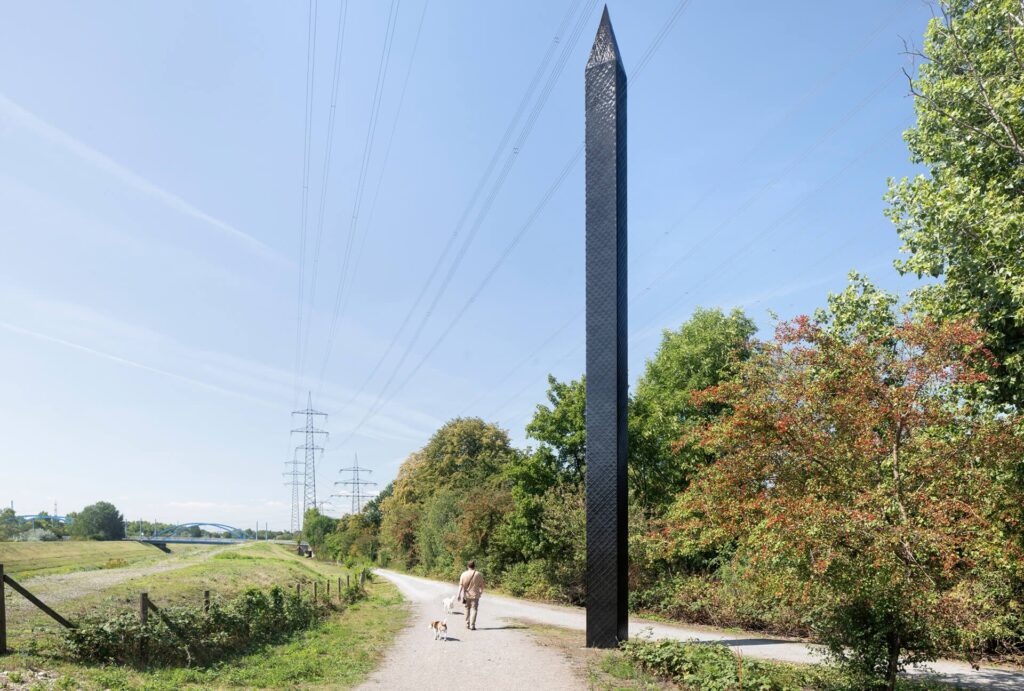 However plain and familiar its form might be, the delicate pointed pillar with its hi-tech, lozenge-shape patterned shell of carbon fibre resembles an alien presence standing at the dusty fork in the path. In ancient Egypt, monolithic obelisks originally represented a link to the world of gods; later, Roman conquerors removed them and installed them as trophies of victory in prominent places around their empire. In more modern times, obelisks have performed cartographic functions by marking distances. Even if the site and size of this sculpture seem less prominent than the landmarks on top of the waste tips, McBride’s work nonetheless suggests diverse references to its location.
By using carbon the artist alludes, on the one hand, to the hi-tech material and to progress-driven civilisation, while, on the other, carbon also denotes the geological era in which coal was formed, thereby referring quite simply to the origins of industrialisation. Not least of all, as this work marks the junction of several cycle paths between the Rhine-Herne Canal and the former Emscher wastewater canal, McBride is also playing on the current period of cultural transformation in the Ruhr region.


From Essen Hauptbahnhof (main station) with U11 (towards Gelsenkirchen Buerer Str.) to the stop Arenbergstr., then continue against the movement direction for about 700 m. 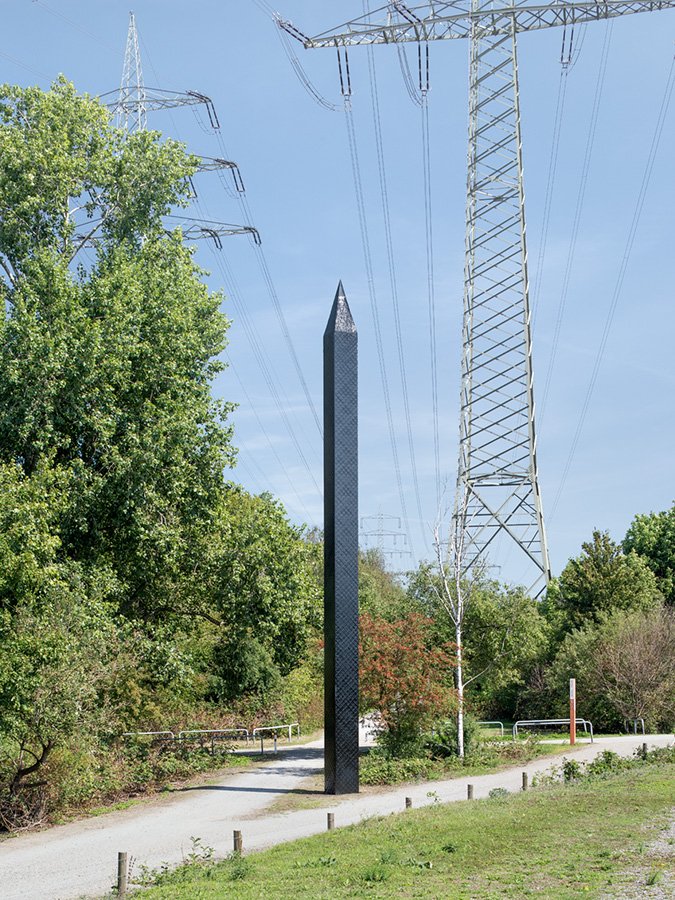 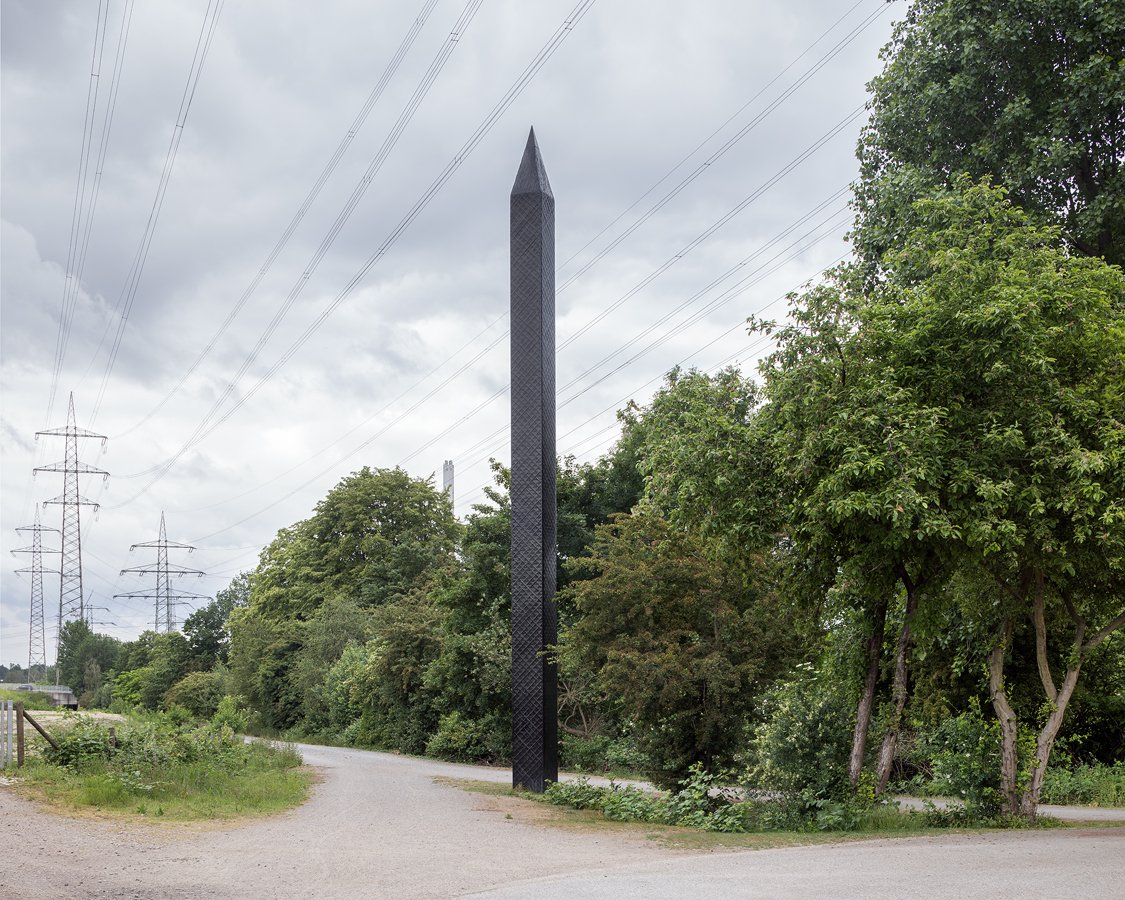 The obelisk, which is almost 14 metres high, stands at an unspectacular crossroads north of the Emscher. 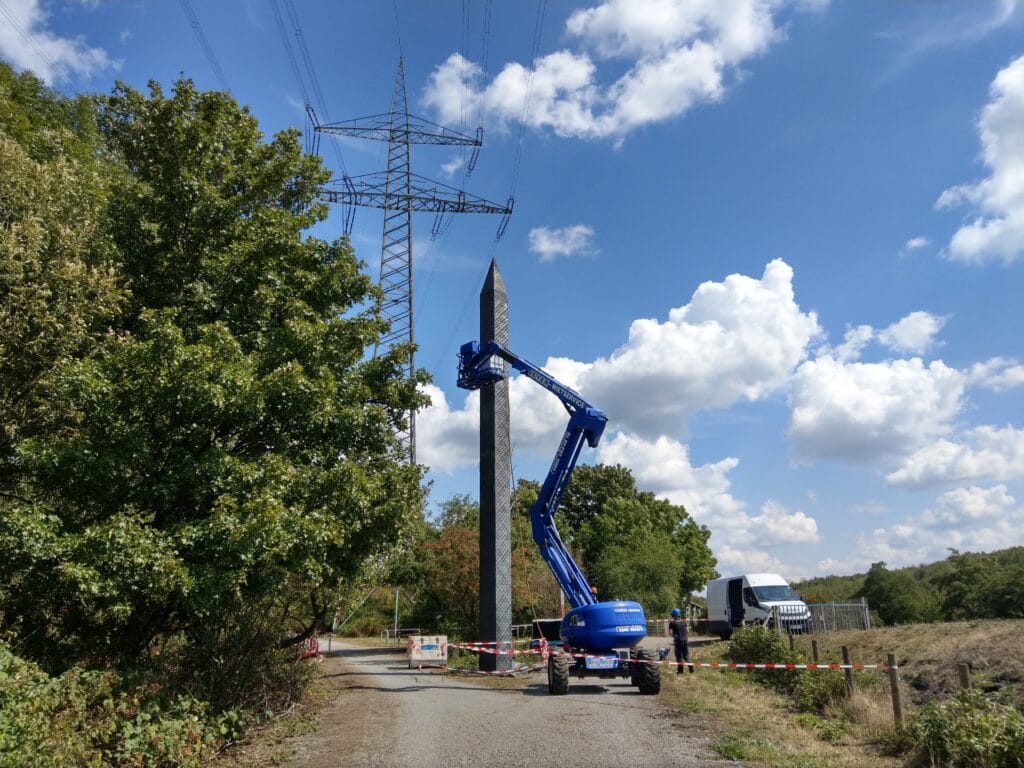 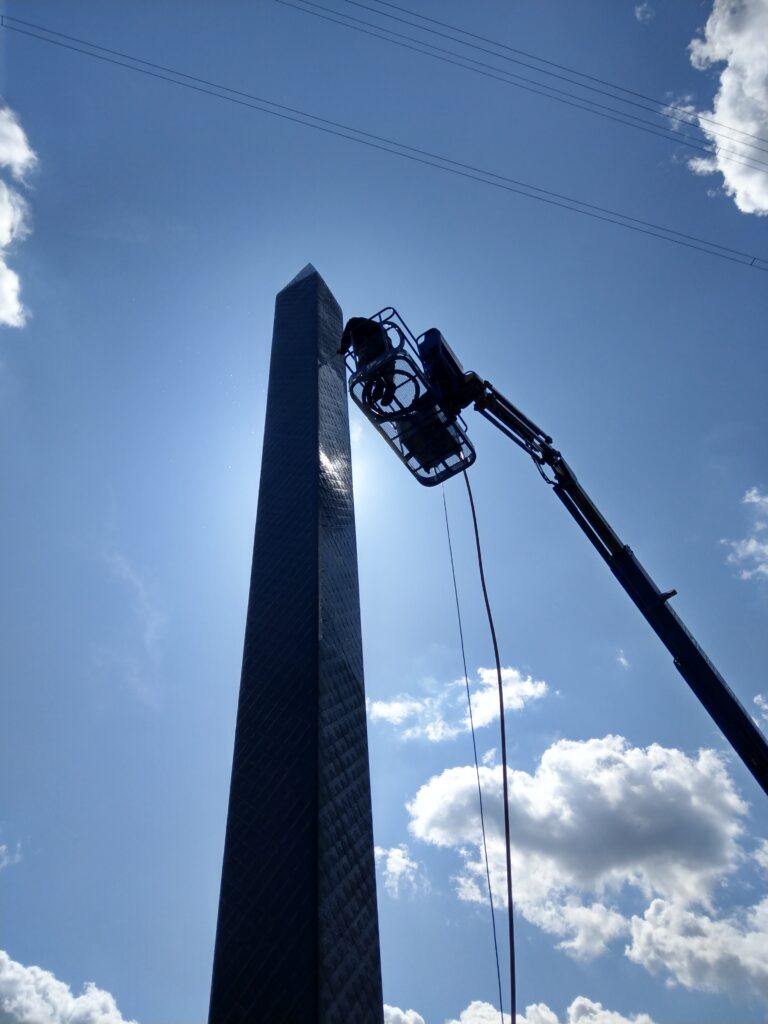 In August 2019, the carbon coating was extensively renewed.

EMSCHERGRAM.
JOIN IN AND UPLOAD YOUR OWN PICTURES TO THE GALLERY.
Upload
Kas

»Here in the Ruhr area, the ›Carbon Obelisk‹ is a striking spatial marker; it defines an axis where there was no war before, and directs the gaze to two existing sculptures in the area: the landmark ›Bramme for the Ruhr Area‹ by Richard Serra and the ›Schwelle‹ by Raimund Kummer.«

As a sculptor, Rita McBride (*1960 in Des Moines, US) is concerned with the mechanisms of urban fabrics and their structures of communication, frequently adopting a reduced, almost minimalist formal language. She has created several large-scale sculptures for public space, among them »Mae West«, one of Europe’s tallest works: a 52-metre-high, carbon fibre sculpture standing in Munich. McBride has held a chair for sculpture at the Kunstakademie Düsseldorf since 2003, where she was also director from 2013 until 2017.Here in the Ruhr area, the »Carbon Obelisk« is a striking spatial marker; it defines an axis where there was no war before, and directs the gaze to two existing sculptures in the area: the landmark »Bramme for the Ruhr Area« by Richard Serra and the »Schwelle« by Raimund Kummer.