The sculpture »Emscher Folly« stands on an area between the Duisburg Alte Emscher wastewater treatment plant and the Bruckhausen iron and steel works on the Alte Emscher and the Alsumer Berg slag heap. Nearby, the Emscher originally flowed into the Rhine.

Here, artist Nicole Wermers has sculpturally arranged dozens of bicycles in a triangle along a steel structure. She shifts an image familiar from urban space to an inhospitable place marked by industrial work. Freed from their use, the design of the bikes emerges all the more clearly. The title term »Folly« also refers to this. It refers to a decorative architecture in 18th century European garden art. Follies are ornamental, often eccentric architectural structures that suggest a function but are usually useless. The sculpture thus refers at the same time to the artificiality of a landscape strongly influenced by man, such as the Emscher region. 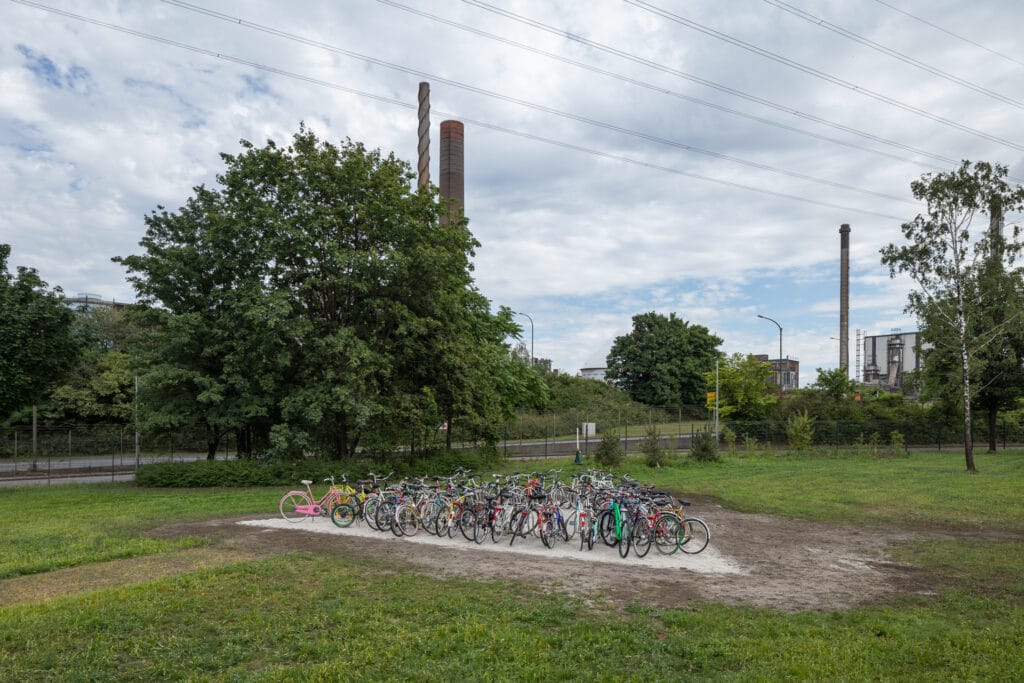 »Many of my works address moments and zones of transition in public space. Gestures or rituals that we actively perform or passively endure when we enter a building, for example. The moment of connecting a bicycle to a public bicycle stand is such a moment. Bike racks are symbols of our contemporary mobile imperative, while also providing a structuring order. Nevertheless, due to the mountains of bikes and the individual way of connecting them, they often become rather chaotic looking obstacles in the city.

The ‘Emscher Folly’ is a sculptural form I designed with a regular wave shape vaguely reminiscent of classic tubular steel furniture. Welded to it are more than 50 bicycles in a jumble that partly disregards the structure of the bicycle stand. At the Duisburg Alte Emscher sewage treatment plant, this creates an absurd moment of frozen condensation. In a place where there is neither reason for a concentrated gathering of people nor a real need to secure the bikes against theft, the moment of locking up, which is temporary in everyday life, becomes permanent by welding on the bikes. The ‘Emscher Folly’ becomes a public sculpture that addresses the frozen mobility of a fictitious moment in time.«

APPROACH BY BIKE
Access by bicycle is possible via the cycle paths along the Alte Emscher. 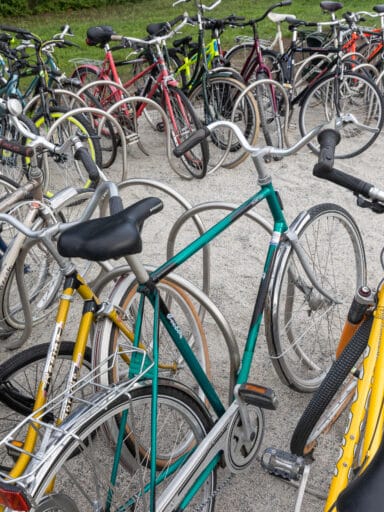 Nicole Wermers (*1971 in Emsdetten) lives and works in London and Emsdetten. Since 2017 she has been a professor at the Academy of Fine Arts in Munich. Among other things, she was a fellow of the German Academy Villa Massimo in Rome in 2012 and was nominated for the Turner Prize in 2015. In her sculptures, photographs and collages, the artist combines formal questions with investigations of urban space and its social, economic and psychological inscriptions. The artist's work reveals a reference to the design of everyday objects, renegotiating their purposeful use within recompositions, often in combination with other materials, forms, and contexts.